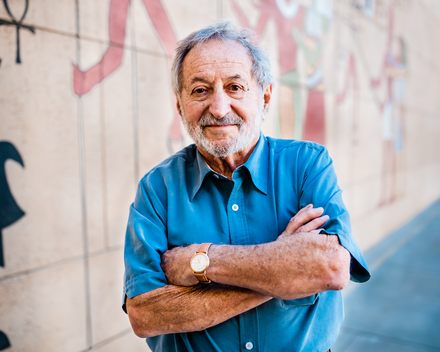 Joe Alves was born in San Leandro, California in 1936. Educated in art, architecture, drama and motion picture design, Joe was recruited by Disney Studios animated special effects department right out of school. He later moved to Universal Studios art department where he moved through the ranks as a set designer, art director, and production designer. In his early years at Universal he had the opportunity to work with such legends as Stanley Kramer and Alfred Hitchcock.

As a young 19-year-old Disney assistant animator, he was assigned to the 1956 MGM classic, drawing the ID for Forbidden Planet and the thorns in Sleeping Beauty. His confidence and creative growth were nurtured by many challenging television and feature film experiences, such as, Hitchcock’s Torn Curtain and Rod Serling’s Night Gallery. Free Jack and Geronimo are all productions masterfully designed by Alves’ imagination and talents.

Alves has designed three features for Steven Spielberg, The Sugarland Express, Jaws, and Close Encounters of the Third Kind. He designed the three mechanical sharks for Jaws, with mechanical-effects man Robert Mattey supervising their physical construction in California. Alves worked on Jaws 2 in 1978 as both production designer and as second unit director. Alves directed Jaws 3-D in 1983.

Alves started on Jaws before a finished script, a director, or even a green light from Universal Studios. The Zanuck and Brown Company sent him the galley sheets of the yet to be published best-selling novel and asked him to do large concept sketches of the shark action in the book. Joe researched and after a long search found Robert Mattey, a retired special effects person from Disney who said he could do it. Joe was responsible for the look and action of the shark. Joe, as production designer, also designed the sets and scouted the locations finding Martha’s Vineyard ideal for the film. Joe was on the set whenever the shark was used. He also sat with Spielberg and sketched the storyboards for the third act and was the 2nd unit Director (uncredited). Between Jaws movies, Joe joined Steven Spielberg in the making of Close Encounters of the Third Kind. They had originally worked together on Night Gallery and Spielberg’s first feature film, Sugarland Express.

Mr. Alves was an innovator and advocate for in-camera practical and visual effects solutions. With a 64-year career that transverses analog-to-digital filmmaking, his design leadership on Close Encounters and Jaws are both analog examples of how to walk through the fires of adversity in order to meet the challenges inherent in pre-digital filmmaking.

The model of New York that he created for John Carpenter’s 1981 Escape from New York has been described as “memorably derelict.” Other film credits include Starman and Everybody’s All-American. A true veteran of Hollywood’s studio system, Alves is a master artist, art director, production designer, producer and director.

After retiring from directing and production design in 2000, he has continued to be sought out to attend film conventions as well as lecture at film studies events. Alves makes his home in Woodland Hills, California with his wife Jerri.