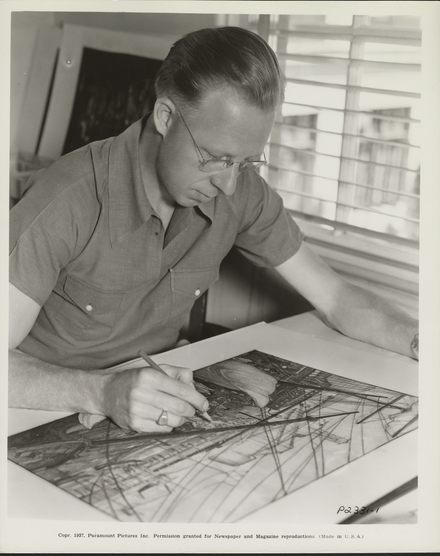 Roland Anderson was one of the most successful art directors working at Paramount during Hollywood’s Golden Age. He helped create the luxurious, Art Deco-influenced style that characterizes the studio’s productions from the late 1920s to the early 1950s, receiving in the process fifteen Academy Award nominations, although never winning an Oscar.

Born in Everett, Massachusetts, to Alvah and Sadie Anderson, he was initially hired as a sketch artist in the Paramount art department in the 1920s, and worked there until his retirement in 1969. The studio’s supervising art director Hans Dreier was more involved in the production design of individual films than Cedric Gibbons, his equivalent at MGM, but Dreier's associates were given considerable freedom to create their own designs for the films they were assigned, and many developed a personal style within the limits set by Dreier. Anderson’s first Oscar nomination was for his very first film, A Farewell to Arms (1933), director Frank Borzage’s interpretation of Ernest Hemingway’s World War I novel. Anderson managed to design historical settings in a uniquely Hollywood fashion, a mixture of modern influences with period details, both real and imagined.

Anderson became director Cecil B. DeMille's favorite designer in the early 1930s, and they worked together intermittently for nearly two decades. Their collaboration began with the classic Cleopatra (1934), one of Anderson's earliest assignments. What the film's designs lack in historical authenticity are made up for by a brilliant Art Deco interpretation of Egyptian motifs. It was an auspicious beginning to an extraordinary collaboration that would include several other landmark DeMille productions: The Plainsman (1936), The Buccaneer (1938), Union Pacific (1939), North West Mounted Police (1940), and Reap the Wild Wind (1942). Anderson's sets are an integral part of each film, capturing perfectly the elements of each story. The last film of this collaboration, the pirate melodrama Reap the Wild Wind is unique for its use of color photography and its underwater scenes which include a famous battle with a giant squid. It is probably Anderson's most varied film.

Throughout the 1930s, no doubt influenced by his success with Cleopatra, Anderson was assigned mainly to historical epics and foreign adventures. His most extraordinary designs in that era were created for The Lives of a Bengal Lancer (1935), directed by Henry Hathaway. The Paramount backlot stood in for the exotic Indian settings (augmented by some location footage for a few exterior shots), his designs creating an imaginary East with their evocative images.

In the 1940s, Anderson worked in a wider variety of genres, displaying a talent for modern, urban American settings as demonstrated in several romantic comedies: Billy Wilder’s The Major and the Minor (1942) with Ginger Rogers, Take a Letter, Darling (1942), and one classic film noir, The Big Clock (1948). All, typically, show Anderson's well-established influences: Art Deco, Moderne, and art nouveau. One of the most interesting motion pictures Anderson worked on in this era is The Great Gatsby (1949), perhaps the definitive version of F. Scott Fitzgerald's novel, providing Anderson with the opportunity to create an opulent world of taste and fantasies.

When Hans Dreier retired from Paramount in 1950 he was succeeded by Hal Pereira whose influences were more contemporary and more American than the German-born Dreier's. Pereira encouraged a less opulent, more modern approach to production design among his art directors. Anderson did not thrive under Pereira's leadership and, while remaining employed by Paramount, he worked infrequently during the next two decades. Still, he did work on one of the best designed and conceived films of the early 1960s, Blake Edwards' adaptation of Truman Capote's novella Breakfast at Tiffany's (1961), a colorful, richly textured portrait of an imaginary Greenwich Village and its bohemian artists.

During his career-long tenure at Paramount, Anderson designed more than ninety films, including classics such as Holiday Inn (1942) with Bing Crosby, Road to Utopia (1946), Son of Paleface (1952) with Bob Hope and Jane Russell, and Will Penny (1967). His final Oscar nominations came in 1963, when he was nominated for his work on both the black-and-white film Love with the Proper Stranger and the color production Come Blow Your Horn. This was the third time that Anderson had been honored with two nominations in one year.