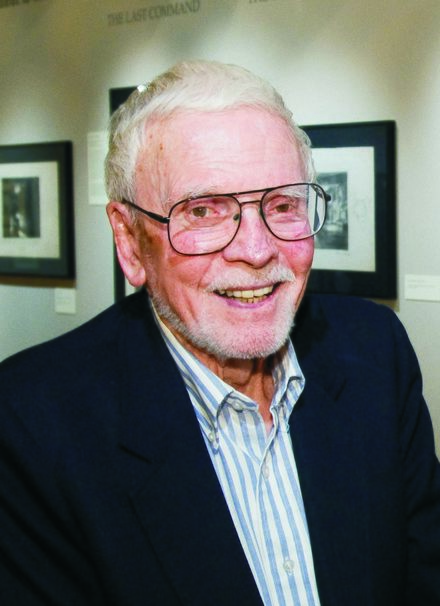 Production Designer Robert F. Boyle was born in Los Angeles in 1909, and raised partly in Los Angeles and partly in the town of Hanford in the San Joaquin Valley, on his family’s small ranch. He attended the University of Southern California, where he studied architecture and graduated in 1933.

Like many young architects completing their training at the height of the Depression, Boyle discovered that job opportunities were limited in the architectural field. While acting as a bit player he was referred to the Paramount Art Department and he started there soon after as a draftsman.
Throughout the 1930s, Paramount’s Art Department, headed by Hans Dreier, regularly brought to life some of the most impressive films in Hollywood.


Boyle was offered his first Art Direction opportunity on the thirteen-part Universal serial Don Winslow of the Navy (1942). While there, his name was mentioned to Alfred Hitchcock, who was at the studio to make a spy thriller which involved a number of locations and sets, including a now famous sequence at the Statue of Liberty. For his first feature as a full-fledged Art Director, Boyle found himself working with the already renowned Mr. Hitchcock on every aspect of Saboteur (1942). After that, Boyle worked with Hitchcock on Shadow of a Doubt (1943), one of his most subtle and brilliant films.

Boyle joined the United States Army Signal Corps during World War II. Trained as a motion picture combat photographer, he was shipped to Europe, arriving not long after the Normandy invasion. He advanced with the American Army all the way into Germany, and even took an unauthorized detour to Berlin to film the fall of that city around the time of Hitler’s suicide.

After returning home, Boyle joined the Art Department at Universal Studios, where he would work for the next ten years. While there, he was the Art Director on nearly forty films, in every genre, from westerns, thrillers and comedies to science fiction films and Abbott & Costello movies. Usually working with limited budgets, Boyle and the other Art Directors at the studio relied on every aspect of the craft of Art Direction to create impressive-looking films with very few resources.

In the late 1950s, Boyle rejoined Hitchcock at MGM on North by Northwest (1959), and received the first of his four Academy Award® nominations for this comedy-thriller that takes Cary Grant and the audience from the United Nations building to Mount Rushmore, with a well-known stop in a very flat cornfield. In 1963, Boyle worked again with Hitchcock on the eerie picture The Birds , a tour de force for the director and Boyle as well, who were faced with new logistical and technical challenges in figuring out how to convincingly create vicious attacks by hundreds of birds.

Boyle’s work as one of Hollywood’s most accomplished Production Designers continued through the 1960s and 1970s when he designed Cape Fear (1962) for J. Lee Thompson and In Cold Blood (1967) and Bite the Bullet (1975) for Richard Brooks. He was also Production Designer on Leadbelly (1976), a low-budget film by Gordon Parks about the blues singer Huddie Ledbetter, and Don Siegel’s The Shootist (1976), a revisionist Western which starred John Wayne as a dying gunfighter, and for which Boyle was honored with his fourth Academy Award nomination. Boyle also worked on several films with director Norman Jewison, including The Thomas Crown Affair (1968), Gaily, Gaily (1969) and Fiddler on the Roof (1971),

In his later years, Boyle devoted a great deal of his time to the American Film Institute, where he created the Production Design program in their Center for Advanced Film Study. He was also a longtime member of the Academy of Motion Picture Arts and Sciences®, serving on the Academy’s Board of Governors for sixteen years, and he was President of the Art Directors Guild and served for many years on the Guild’s Executive Board. In 1996, when the Guild established its Lifetime Achievement Award, Boyle was its first recipient. In 2001, when the Hollywood Film Festival first recognized Production Designers, Boyle was the inaugural honoree. And in 2008, the Motion Picture Academy, for the first-and-only time in its eighty-year history, awarded an honorary Oscar® to a Production Designer: Robert Boyle.