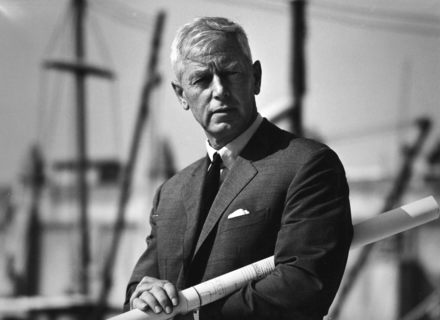 Born in Nebraska, Hilyard Brown studied architecture at the University of Southern California along with ADG Hall of Fame members Robert Boyle and Boris Leven, and entered the film industry in 1934 as a draftsman at RKO. His first screen credit was as an assistant art director on Citizen Kane (1941), working with art director Perry Ferguson. That classic film influenced much of Brown’s later work: Valley of the Zombies (1946), All My Sons (1948), Creature From the Black Lagoon (1954), and Al Capone (1959).

Brown made the move up to art director after the war and designed a series of low-budget Republic westerns: Bells of Rosarita, Phantom of the Plains, Marshal of Laredo, and Don’t Fence Me In (all 1945). In the early 1950s he moved to Universal and worked on horror and suspense films, as well as his signature westerns. By far his most memorable film from this period was The Night of the Hunter (1955), directed by Charles Laughton and starring Robert Mitchum. Brown’s shadowy, expressionistic settings, shot with high-contrast black-and-white Tri-X film by Stanley Cortez, are still striking and disturbing today. At that time, the film’s obvious use of sound stage exteriors and fragmentary sets seemed radical and revisionist at the same time. It remains a masterpiece of scenic design.

When Hall of Fame inductee John De Cuir was selected to design 20th Century-Fox’s immense production of Cleopatra (1963), he knew that the project was so extensive that he needed to delegate pieces of it to other designers. A lifelong sailor, Hilyard Brown loved boats, and De Cuir invited him to supervise the design and execution of the Roman triremes and Egyptian barges, most from designs not built for the past two millennia. Brown took on the task, and even ended up in the final cut of the film, dressed as an Egyptian sea captain, piloting Cleopatra’s personal barge.

By the 1960s, with studio art departments on the wane, Brown became a freelancer and designed films for Columbia, Fox, MGM and Disney. Von Ryan’s Express (1965), Freebie and the Bean (1974), Billy Jack Goes to Washington (1977), and Hooper (1978) were a few of his more memorable assignments. For more than fifty years, Hilyard Brown was one of Hollywood’s finest designers.

He received an Oscar® for his work on Cleopatra.