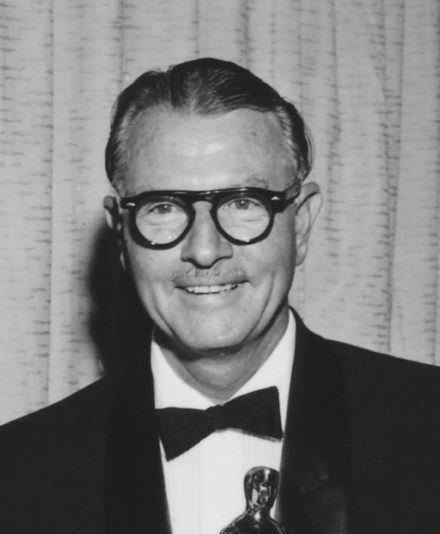 Malcolm Brown was one of Cedric Gibbons’ unit art directors at MGM in the period surrounding the Second World War, and he made his most enduring mark with gritty war dramas such as They Were Expendable (1945), a brutally realistic black-and-white film about PT Boat warfare directed by John Ford.

Brown was born in 1903 in Hackensack, New Jersey and moved with his parents as a young child to Boston. He studied art and architecture at Boston’s acclaimed School of the Museum of Fine Arts, and came to Southern California immediately after he graduated in 1922. His particular strengths were as an illustrator and set designer and, like many of his contemporaries, he initially practiced architecture, and would continue to do so when he had spare time. The first evidence of motion picture employment for Brown is in 1929, when he was working as the head of the drafting room at the William Fox Studios. By 1937 he had moved to MGM, working at first interchangeably as an illustrator and set designer. He very quickly rose to the position of unit art director and he remained with MGM into the early 1960s.

During World War II, he served as a Captain in the Army Signal Corps where he became a specialist assigned to designing and supervising camouflage systems for military and industrial applications. Formally released from the service in October of 1944, he returned to MGM where he immediately designed They Were Expendable.

Brown was not just a designer of war films; his success stretched into nearly every cinematic genre. MGM’s Supervising Art Director, Cedric Gibbons, valued Brown highly and entrusted him with the supervision of some of the studio’s more difficult pictures. His first film there was Young Dr. Kildare (1938) and like most art directors in that period, he did many of his own set sketches and construction drawings. Gibbons then asked Brown to take time off from designing to create some concept sketches for The Wizard of Oz (1939). He followed that up by designing a steady succession of westerns such as Northwest Passage (1940), musicals such as Babes on Broadway (1941) directed by Busby Berkeley, and romantic comedies such as the Lana Turner vehicle, An American Romance (1944). He designed the Technicolor spectacle The Three Musketeers (1948), with Gene Kelly and Lana Turner, which features some of the most inventive and skillful sword fighting (choreographed by Kelly) ever filmed, and his art direction for the quintessential film noir, The Bribe (1949) with Robert Taylor and Ava Gardner, revealed yet another aspect of his prodigious design talents.

Brown received his first Academy Award nomination for I’ll Cry Tomorrow (1955). Somebody Up There Likes Me (1956), the dramatic life story of middleweight boxing legend Rocky Graziano directed by Robert Wise, won Brown his only Oscar.

In between films, Brown designed the western-town theme park, Buckskin Joe, Colorado, between Denver and Colorado Springs, and then went on to use it as the location town for Cat Ballou (1965) several years later. At one point, Brown even tried his hand at the new medium of television, and designed a season of Rod Serling’s Twilight Zone.

For thirty years, Brown was a rock in MGM’s Art Department, the consummate professional designer, upon whom Gibbons could always depend to turn out wonderful looking films on the most remote locations or under the most difficult circumstances.