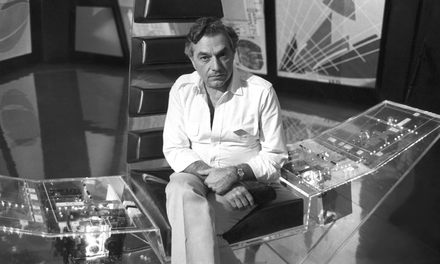 A good film production designer must be an architect, engineer, painter, decorator, draughtsman and visionary. Sir Ken Adam was all of these and more. He had a knowledge of the arts in general, which he was able to use to recreate the historical period of a movie, exemplified by his two Academy Awards for best art direction, both set in the 18th century: Stanley Kubrick’s Barry Lyndon (1975), inspired by the English landscape and portrait paintings of the period, and Nicholas Hytner’s The Madness of King George (1994).

It was Adam’s designs for seven James Bond movies, however, that made him probably the most recognized production designer whose name and work are widely known. He provided the visual template for the 007 franchise in Dr. No (1962), the first in the enduring action-adventure series.

Adam was born Klaus Hugo Adam, in Berlin, to a Jewish family. While young Klaus was attending the Berlin French school, the Nazi party came to power, and the family fled to Britain in 1934, where 13-year-old Klaus went to St Paul’s school in London, then University College London. A meeting with Vincent Korda, the Hungarian-born art director, encouraged him to study at the Bartlett School of Architecture, with the intention of entering the film business, but the outbreak of the Second World War interrupted his studies.

Immediately after the war, he entered the film industry as a draughtsman, working his way up to assistant art director and then art director (uncredited) on Michael Todd’s spectacular all-star production of Around the World in Eighty Days (1956). Adam’s first credit as production designer was on Jacques Tourneur’s Curse of the Demon, 1957.

After working on a few films produced by Albert “Cubby” Broccoli, notably The Trials of Oscar Wilde (1960), Adam was asked to design Dr. No. “I said yes to Dr. No, and thought I was prostituting myself,” Adam said. One of the most effective sets in Dr. No is the room where Professor Dent (Anthony Dawson) is interrogated and where he receives the tarantula that is meant to kill Bond (Sean Connery). “I think it is one of my favorite sets, because it is so simple and theatrical,” Adam said. “I think I had £450 left in the budget. So, I really had to come up with something very quickly that was very easy to construct and at the same time create a very important effect.”

At the other end of the financial spectrum were the realistic Fort Knox set in Goldfinger, and Spectre’s volcano base in You Only Live Twice (1967), which included a heliport and a monorail constructed at Pinewood Studios at a cost of $1m.

Apart from his landmark sets, Adam was the inventor of Bond’s Aston Martin DB5 used in Goldfinger (1964), complete with a bullet-proof shield, Browning heavy machine guns, rams, revolving number plates, smokescreen and oil slick projectors, a homing tracker, and an ejector seat, and he also dreamed up the submersible Lotus Esprit in The Spy Who Loved Me (1977). He designed the car in Chitty Chitty Bang Bang (1968), going beyond anything Fleming had imagined in his children’s story. In contrast, Adam articulated the darker side of a neurotic technological age in his design of the ominous circular War Room, central to Kubrick’s nightmarish vision of the inevitable heated ending of the cold war in Dr. Strangelove (1964). The setting triggered the memorable quip from Peter Sellers as the US president: “Please, gentlemen, you can’t fight here, this is the War Room.”

The last Bond movie that Adam designed was Moonraker (1979), the centerpiece of which was an elaborate giant three-story space station. He then moved over to more modest subjects, such as the two-hander Sleuth (1972).