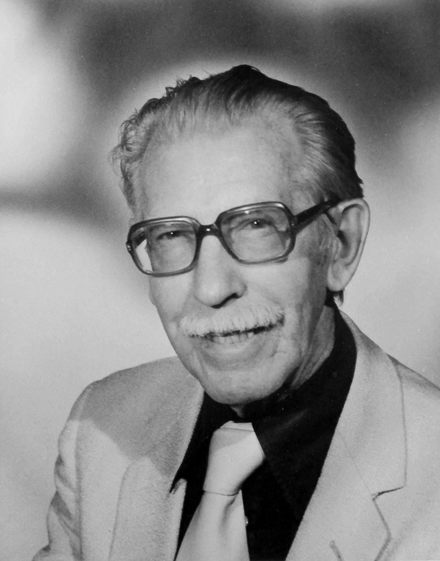 An architect, decorator, muralist, set designer, and art director, John Gabriel Beckman was a dapper, cultured, modest gentleman with an extraordinary wealth of talent whose motion picture career began in Hollywood during the silent era and continued for more than seventy years. His life was nothing if not colorful: a possible descendant of the Czar of Russia, he met the painter Claude Monet in Paris, survived the 1906 San Francisco earthquake, cancelled a passage he had booked on the Titanic’s maiden voyage, designed murals for Grauman’s Chinese and Egyptian theaters, married twice and was still working on the CBS series Designing Women when he died in 1989 at the age of ninety-one.

Born in Astoria, Oregon where his father practiced medicine, Mr. Beckman was raised in San Francisco until his parents sent him to Russia at the age of twelve to study. Of Russian descent, he sometimes claimed to be related to the last czar and czarina, Nicholas and Alexandra, whom he met while living there. He was forced to return to the United States in 1912 when his mother became ill. His father had booked him passage out of England on the Titanic, but at the urging of friends who told him the new luxury liner was unsafe, Mr. Beckman switched to its sister ship, the Olympic. He briefly attended the University of California, Berkeley (he later told an interviewer that he was expelled for "asking too many embarrassing questions"), and then worked for a Sacramento architect before moving to Los Angeles in 1920.

For the architectural firm Meyer & Holler he created color schemes, furnishings, wall hangings, and murals, including decorations for Grauman's Egyptian Theatre. In 1927 he headed the design team for the new Grauman's Chinese, soon to be the world's most famous theater. That project led directly to a commission for the Avalon Casino on Santa Catalina Island that turned out to be Mr. Beckman's masterpiece.

He originally intended to do something Greek, but instead decided on a style that was labeled Aquarium Deco. Working with a team of five mural artists and dozens of assistants, he created nine colorful murals for the entrance lobby loggia, art deco murals painted on panels surrounding the audience in the first floor theater, and a fantasia of fauna, mermaids, explorers, and other undersea deities painted on a burlap-like, sound-absorbing fabric in the Casino. He also designed the second-story ballroom with its elaborate ceiling. The grand opening of the opulent Casino was held Memorial Day, 1929, and Mr. Beckman’s reputation was firmly established.


When the Great Depression dried up his mural commissions, he switched careers and became a set designer for several Hollywood studios, most notably Warner Bros., drawing sets for high profile films such as Mr. Deeds Goes to Town (1936), Lost Horizon (1937), The Adventures of Robin Hood (1938), The Maltese Falcon (1941), Casablanca (1942), Mildred Pierce (1945), and Rhapsody in Blue (1945).

His first art direction credit was for Charlie Chaplin‘s Monsieur Verdoux (1947), and he went on to design more than sixty films for the industry’s finest directors – William Wellman, Raoul Walsh, Mervyn LeRoy, Michael Curtiz, and Alfred Hitchcock – movies as diverse as Calamity Jane (1953), Young at Heart (1955), The Bad Seed (1956), The Helen Morgan Story (1959), and Gypsy (1962). He split his personal time between a home in Sherman Oaks and a small house in Cambria, an artists colony on California’s central coast, where he could paint.


In later years, having outlived both of his wives, he rented a cottage on the Studio City property of his friend Ross Bellah, head of the art department at Columbia Pictures Television, and worked for Mr. Bellah on a long list of television series, pilots and movies. He was still working full-time as the art director of the CBS series Designing Women, always courtly and well-mannered, coming to work each day in jacket and tie (or cravat), when he passed away quietly in his sleep at home in that Studio City cottage after seventy years of extraordinary work.