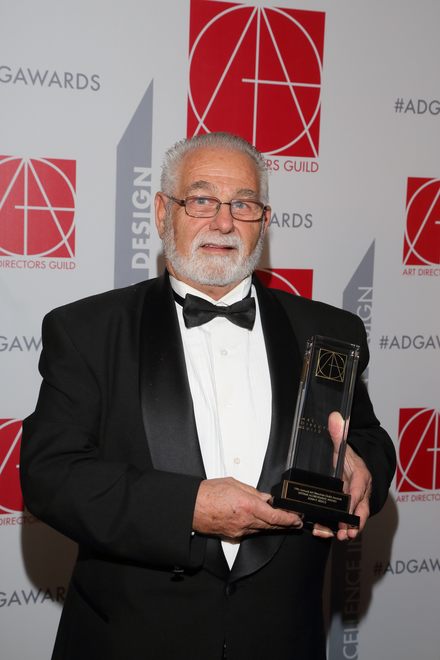 John P. Bruce came into the industry back in 1967 when he started at MGM Studios as an Apprentice Set Designer, joining Local 847 at that time and remained active until the late ‘70s when he became an Art Director. He was elected vice president of Local 847 three times and always held a position on the board. At that time one was not able to hold dual membership and so he joined Local 800. When the rules changed in the early 90’s he reactivated his Set Designer status and has held a board position ever since, though he is now semi-retired.

He was employed continuously all these years, a rarity in this freelance field. Among his many television credits are Falcon Crest, The Waltons, Barnaby Jones, Murder She Wrote, X-Files, Star Trek: Deep Space Nine, and Baretta. More recently his credits include Scandal and Dexter. Motion picture credits include Armageddon, Jack Frost, Batman & Robin, Mambo Kings, Gray Lady Down, Ice Station Zebra, Shoes of the Fisherman, and 15 Minutes.

Despite his tough work schedule Bruce was able to find time during the years for many charitable efforts. He has been a member of BPOE – Elks, San Pedro chapter. He was a Girl Scout Leader, when his daughters were active and was awarded the Girl Scout Sweetheart Award. He was active with his grandson in the YMCA Indian Guides, where he held the position of Chief Grey Wolf. He has also been active in the churches he attended, helping design and build Christmas and Easter pageants. He is currently involved with feeding the homeless in San Pedro and he supports a Battered Women and Children Shelter in Tujunga, Mexico. In 2010 he designed a two-story addition to this facility. Several decades earlier he undertook a similar project, designing a facility for housing problematic children in Susanville, California. He continues to support this facility.

He is a long-time member of the Academy of Model Aeronautics. He helped decorate a Rose Parade float. He was one of the designers of Parker Lighthouse in the Long Beach Marina. For more than 40 years he has kept active in architectural design and construction outside the industry.