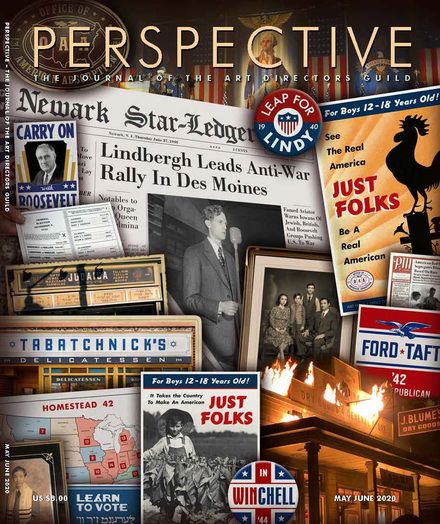 Locke & Key, adapted from the wonderful comic book series by Joe Hill and Gabriel Rodríguez, follows the three Locke siblings and their mother after their father is murdered and they move across the country into his ancestral home, Keyhouse. They discover that the home is full of magical keys with unique powers and wake a demon who wants to steal them back.

The opportunity to design Keyhouse, which is essentially a lead character in the series, was exciting and intimidating in equal parts, and I was thrilled when executive producers Carlton Cuse and Meredith Averill reached out to me as I was finishing up American Gods. They sent me the first few scripts, I sent them a pitch book and they brought me on board.

Their vision was to keep the house inviting—to make it something you’d want to explore and get acquainted with. I was also going to need to create contrast between the house and the ‘key spaces’ —worlds that the keys opened up. After moving in, the Locke family would be the ones to wake up the house. This would be shown by the house getting mended as the story progressed—it’s an injured character that gets brought back to life. The mom Nina (Darby Stanchfield) starts working on broken plaster walls and wallpaper, and the kids, Bode, Tyler and Kinsey (Jackson Robert Scott, Connor Jessup and Emilia Jones) would open up its powers after finding hidden keys. I wanted to maintain the aesthetic of the comic book in some elements but keep it relatable to viewers. The scale of the house and its spaces needed to feel grand but still grounded to its environment and characters.

After reading all ten scripts, I started to research North American East Coast architecture. I then travelled to Lunenburg, Nova Scotia, a three-hour flight east of Toronto, which would be the location for Matheson, Massachusetts, in the story. Lunenburg has a unique architectural style, with colourful ship-lap siding, porches and unique windows.

The exterior of Keyhouse was built on a leased empty 10-acre parcel of land just outside Toronto. Once Art Directors William Cheng and Hank Gay put together proper architectural drawings and site plans, the tech-savvy construction department, run by Dwight Doerksen, started building the Keyhouse exterior facade in the middle of Canadian winter, when temperatures range from 0 degrees to -25C. This was…challenging.

The crew prefabricated the facade walls inside a warm workshop. They had to pre-paint the entire facade before it was put together because the paint was not going to dry outside in the sub-zero temperatures. The prefabricated facade sections were all trucked to the build site and everything was put together like a Lego kit. The paint had to be tied together with aging and vegetation, vines, etc. A little bit of on-site painting was accomplished by adding anti-freeze to the paint.

The third floor and roof of the exterior were added digitally, with visual effects. Visual effects supervisor Wojciech Zielinski and I collaborated—the Art Department modeled the upper section of the house and handed it off as a 3D asset to the VFX team so they could texture and blend it into the rest of the exterior house.

Out-buildings were also built on the site—the wellhouse and garden shed, an apple orchard was planted, as were numerous shrubs and a small vegetable garden. I was looking to future episodes and seasons, as there would be more to discover on the Locke estate later on. The cemetery was also built on the site. Once I found a good memory tree, I decided to locate the cemetery gate and all the headstones around it.

All Keyhouse interiors—the main floor, second floor and basement, were built from scratch on soundstages in Toronto. My first challenge was figuring out how to create a four-story mansion in a studio lacking the height required.

When starting to design a main studio set that would be used over and over throughout the season, my first thoughts were around how the director of photography would light it—especially when there would be limited space for the lights outside the windows. One can design and build a lovely looking set, but if it can’t be lit, or if the camera can’t be perfectly placed, the set may not photograph the way it was intended.

Linking the two sets was also critical to allow seamless transitions from exterior to interior. Building in porches, upper balconies and inner
foyer vestibules that matched on the exterior build and the studio build helped connect the location build and studio sets. The design also had to
connect the first floor, second floor and the basement, which were all built on stages in different studios.

The main floorplan and second-floor bedroom layout was a big topic of discussion between Carlton, Meredith and me. There were many story points that involved a dance between rooms and floors. And there were plans to have a lot of continuous camera moves in this set, so tying the floorplan together was critical for those seamless shots. I worked closely with director Michael Morris and DP Tico Poulakakis, who directed and shot episodes one and two. We planned carefully on how we’d get oners done; what type of flooring we’d use, creating removable walls and bookshelves and other things to enable that fluid movement. Sequences including the kids finding the music box, Nina finding Joe dead in his house and Bode rolling through the house on his wheelie shoes were all long fluid shots that were possible because of that planning. Camera operator Gilles Corbeil and key grip Mitch Holmes shot the sequence with Bode on an airline wheelchair rig.

There was a lot of focus on the kitchen and how it linked to the library, since so much time was spent there, and also, because the actors needed another access point to the second floor, the sets were designed so the kids could exit out of the kitchen instead of having to go to the front of the house to go upstairs. I’m a big fan of real ceilings in my sets—all of the Keyhouse sets have them. With a single floorplan for a house this large, it was a challenge to get natural light into the sets. In order to get light further into the set, I brought in some skylights in the kitchen and had a skylight in the main foyer linked with the second-floor landing.

Other exciting design builds were the bottom of the well, Bode’s Arcade, Kinsey’s Candy Store and the garage set where the Savini squad has its moment with the boy in the lobster suit, which was a collaboration between me and Sean Sansom (the show’s prosthetics wizard).

In order to plan for set builds, the production provided all ten scripts at the beginning. One of the more challenging sets was the caves. The main challenge was that the cave set needed to be dry when the kids walk in, then become flooded so that the kids have to swim out. Two large caves were built. The main cave was built in a sixty-foot metal box that could be filled with water and have the actors swim through. The second cave was built on top of a pool so that the kids could swim up into the cave. The cave exterior was linked to a location in Nova Scotia called ‘The Ovens’ where the kids stand looking over the cliffs.

Every storyline in the series radiates from Keyhouse in some way, so creating and placing the intricate details was critical and also a lot of fun. To retain an element of the comic book art, most of the wood trim, railings and ceiling details were custom made. Close inspection will reveal the L&K logo from the comic in the wood trim. A custom painting was also created so a key could be hidden within it.

William Koon, the amazing scenic artist, created century-old walls by layering plaster up and down so that the walls had an undulating texture. The second-floor walls were covered in carpet, then plastered over to create a cracked plaster look. He removed large sections of wall to insert a raw lathe and plaster look. This technique, along with peeling wallpaper and water damage, gave Nina a place to start mending Keyhouse.

My go-to set decorator is Jaro Dick; we’ve worked together for many years and he knows what I’m going for. I’ll do books for style research, types of furniture, what sort of books should be in the house, interesting pieces of set dressing, etc. Our goal was to show that Keyhouse had been passed down from generation to generation. It would have dated back to the mid-1800s. The wallpapers were all sourced in England. The show’s expert buyers sourced antiques from all over. For instance, the kitchen island base was made of two matching antique cast iron wood stoves. Alongside those antiques I wanted to add some furniture from Rendell’s childhood of the late ’80s to early ’90s. Lamps, stereos, the great room sofa and some bedroom furniture brought that era into the house. Many of the objects placed in Keyhouse are pieces of the Locke & Key puzzle—either for this season or future stories.

Bode’s room was a special dress for me. I’m the father of two boys, six and ten. My ten year old provided all the drawings and Lego builds for Bode’s room. Whenever he watches the show, he always hits pause to show everyone his drawings on the walls.

Working on Locke & Key was a really great experience for so many reasons. It was a giant world-creating project. I’m still relatively young in my career and being able to design essentially a main character from the ground up was an incredible opportunity. Working with Carleton and Meredith and building a new creative relationship is also really great. And like American Gods, it was a chance to design something from a famous book in a way that captures the original spirit and gets fans to love the show as much as the books. There’s a lot to live up to but it’s an exciting challenge. ADG