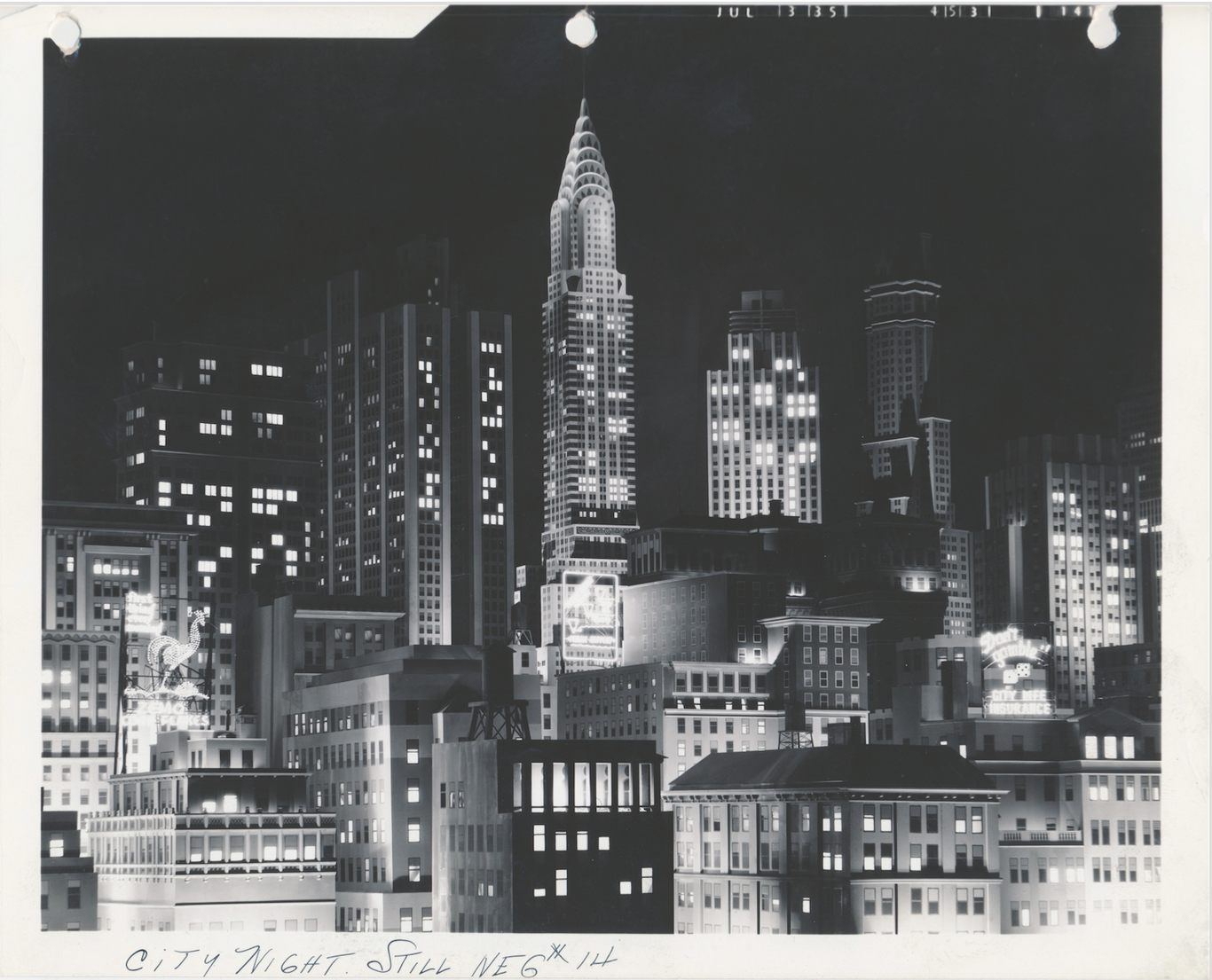 Above Image: NEW YORK CITY DIMENSIONAL SKYLINE BACKING, USED IN 1935 FOR THE FILM BROADWAY MELODY OF 1936.

These are just a few of the queries members might direct our way here at the Art Directors Guild Research Library and Archives.

The ADG’s library and archives were formally established in 2012, but the Guild’s unique collections date back much further than that. For many years, Guild members have been donating materials to the local union that might help their colleagues in their work or preserve the history of Production Design. As a result, the Guild ended up with a large collection of books, magazines, illustrations, set design drawings and photographs, but without a library to store them in. Along the way, the Guild also acquired important collections from other sources, most notably the CBS Research Library, and also began internally pulling together files and publications that documented the history of the union and its members. After years of effort on the part of former Guild president Tom Walsh and other dedicated members, it all came together in 2012 when the Guild hired archivist Rosemarie Knopka to bring organization, clarity and oversight to the collection. Thanks to the progress made during Rosemarie’s five-year tenure, the Guild offices are now home to a research library and archives that are accessible to any member of the Guild who is looking for visual inspiration. I joined the ADG staff as archivist last year and have been focusing on raising awareness about the riches to be found in this uniquely specialized collection, one of the few production research libraries still available in the Los Angeles area.

The heart of the ADG library is its book collection, which has been built primarily from member donations. The shelves are filled with more than sixty-five hundred books on art, architecture, design, decorating, culture, travel and history, and range from the late 1800s to the present. The collection also includes books about the history and practice of Production Design, as well as a good selection of works about the movie industry. We also have a wide range of vintage periodicals, including long runs of magazines like Architectural Digest and Horizon, and small runs or individual issues of titles like Fortune, Advertising Art, House Beautiful, Confidential and many others. All of these materials are available to anyone who comes in to visit us, and the titles are searchable in our online catalog, which can be accessed through the ADG website.

One of the ADG’s most versatile collections is the CBS Research Library files. My understanding is that the collection started life as the Republic Pictures research library, when Republic owned what is now known as Radford Studios. CBS took over the library when they moved on to the lot in the 1950s, and the Guild agreed to take the collection in when CBS was looking for a new home for it in the mid-2000s. This visual research collection of images, clippings, and ephemera is a treasure trove of material organized for use by members of the Art Department. Although it’s not nearly as extensive as the comprehensive libraries that used to be maintained by the Hollywood studios, it functions in much the same way, with unique subject headings geared toward visual research and location files on every state and many countries around the world. When delving into the files, one finds an eclectic mix of magazine and trade publication clippings, advertisements, photographs, illustrations, flyers, brochures, maps and postcards. The time period covered is primarily the 1930s to the 1970s, but there are plenty of items from earlier eras as well. Alongside the CBS collection, there are also research files and photos donated to us by individual Production Designers, including Robert Boyle, Gene Allen and, just last year, Marcia Hinds.

Another excellent resource in the library is the printed ephemera collection, which includes everything from vintage travel brochures, menus, promotional booklets, souvenir items, and maps to theater programs, historical site booklets, and museum, auction and product catalogs. Both the ephemera and the research files are a gold mine of visual information about the world of the past, captured in items that, in many cases, were considered trivial or not worth saving when they were created. Currently in process is the cataloging of each of the pieces of ephemera individually in order to make them more findable, and in some cases they are being scanned to provide visual reference in the library catalog.

Working with these collections over the last year has made me realize just how many gems are waiting to be discovered by our members. For instance, one day my colleague Leslie Diller Zollo and I came across a large scrapbook with a non-descript plain canvas cover. Inside is a remarkable collection of around seven hundred 1920s and 1930s postcards from Europe and North Africa, carefully attached to the pages with photo corners, and in many cases, annotated with brief remarks in white pencil. The book, assembled by an unknown traveler, not only documents one person’s dream European trip, but also is a time capsule of Europe before World War II, with images of Dresden, Berlin, Milan and other cities that were heavily bombed during the war. The archives also has a set of three vintage Hollywood scrapbooks donated by longtime ADG member Denis Olsen. They were lovingly compiled by his grandmother back in the 1930s, and contain fan magazine articles and postcards on her favorite movie stars, with an emphasis on their homes and personal lives.

Photographs are another strong suit of the library. There are hundreds of research photos in the CBS collection on a diverse assortment of locations, topics, buildings, historical events and modes of transportation. In addition, the library’s holdings include thousands of set reference photos for Hollywood films, many donated by members. They show expertly designed interior and exterior sets for three hundred movies made from the 1930s through the 1960s. Most are organized by film title, but there are also dozens of images from unidentified films that are categorized by topic, making them useful for researchers looking for ideas for everything from offices, cocktail bars, and bedrooms to kitchens, courtrooms and railroad stations. There are also hundreds of scene stills from movies and television shows, and a collection of image-based personality files.

For anyone interested in photographs of sets designed for three-camera shows, you don’t have to look any further than the Edward Stephenson collection. Stephenson saved hundreds of set photos from the shows he designed, including The Golden Girls, Blossom, and Empty Nest and they have now found a home at the ADG. In fact, the Edward Stephenson donation is one of the archives’ largest collections. In addition to photographs, it includes hundreds of beautiful illustrations and set designs from Stephenson’s distinguished career in television, which started in the 1950s. His collection also includes a fascinating array of sketches, drawings, posters, correspondence and other materials related to Stephenson’s service with the U.S. government’s overseas entertainment division in Japan following World War II. Other important career collections in our archives include the papers of Brian Bartholomew, Donna Cline, John Shrum, Hub Braden, Charles Koon and Jan Scott. A former ADG president and a winner of a record eleven Emmy Awards for Art Direction, Scott was one of the first women Production Designers in the Guild, and her collection is a testament to her professionalism and creativity.

Another major component of the ADG archives is our large collection of set design drawings, including elevations, set plans and blueprints. Many came in as donations from the families of Jan Scott, Edward Stephenson and Brian Bartholomew, but many other members have also contributed to the collection, which features hundreds of hand-drawn renderings for both movies and television programs. The collection also includes a number

of drawings that relate to film and TV studio facilities, from plans for front-office redesigns and new and improved stages to countless drawings done for sets built on the backlots of MGM and the other major studios. The collection also contains various other kinds of production art, including illustrations, concept drawings, storyboards and title art. Since 2010, the Guild has worked with the Academy’s Margaret Herrick Library to preserve and store many of the original illustrations, but we still have a selection of these unique works of art stored at the Guild.

In addition to assisting members with production research, the ADG archives also offers support to other projects undertaken by the Guild. One of the most exciting of these was the Backdrop Recovery Project. Beginning in 2017, the Guild worked with J.C. Backings to preserve over two hundred historic painted backdrops that were in danger of being discarded as the company prepared to move to a new facility. Guild volunteers helped identify and photograph the backings, and the Guild underwrote the cost of storing them until new homes could be found for them at museums, theaters and universities. As a result, the ADG Archives received other materials that were stored at J.C. Backings’ home on the Sony lot, including test paintings, research cards, black-and-white photos of the backings in their catalog, and more than eighty notebooks containing research photos for backings and images of them in use in MGM films. As time allows, the archives staff is working through these materials and plans to add information about them to the catalog, along with selected images.

Another area that the archives supports is the history of the Guild. Our collection includes copies of all of the Guild publications, as well as meeting minutes, membership directories, constitutions and bylaws, and other documentation. The collection also includes oral history interviews recorded over the years with various members, including a number done with scenic artists in conjunction with the book The Art of the Hollywood Backdrop. We also have recordings of other Guild events, such as the Film Society screenings and the annual Oscar Panel, as well as a collection of movies and television programs on DVD.

I hope this overview of our Research Library and Archives has been inspiring, as well as informative. Members are encouraged to visit in person to take advantage of this wide range of resources, but if that’s not possible, I can also provide research materials via email, with a quick turnaround. We are also working on getting more images from and information about our collections into the online catalog, so that members can do their own research using the ADG website. To find out more about any of the materials I’ve mentioned, or to explore further, contact me via email at barbara@adg.org. If you have a visual story to tell, we want to help you bring it to life. ADG