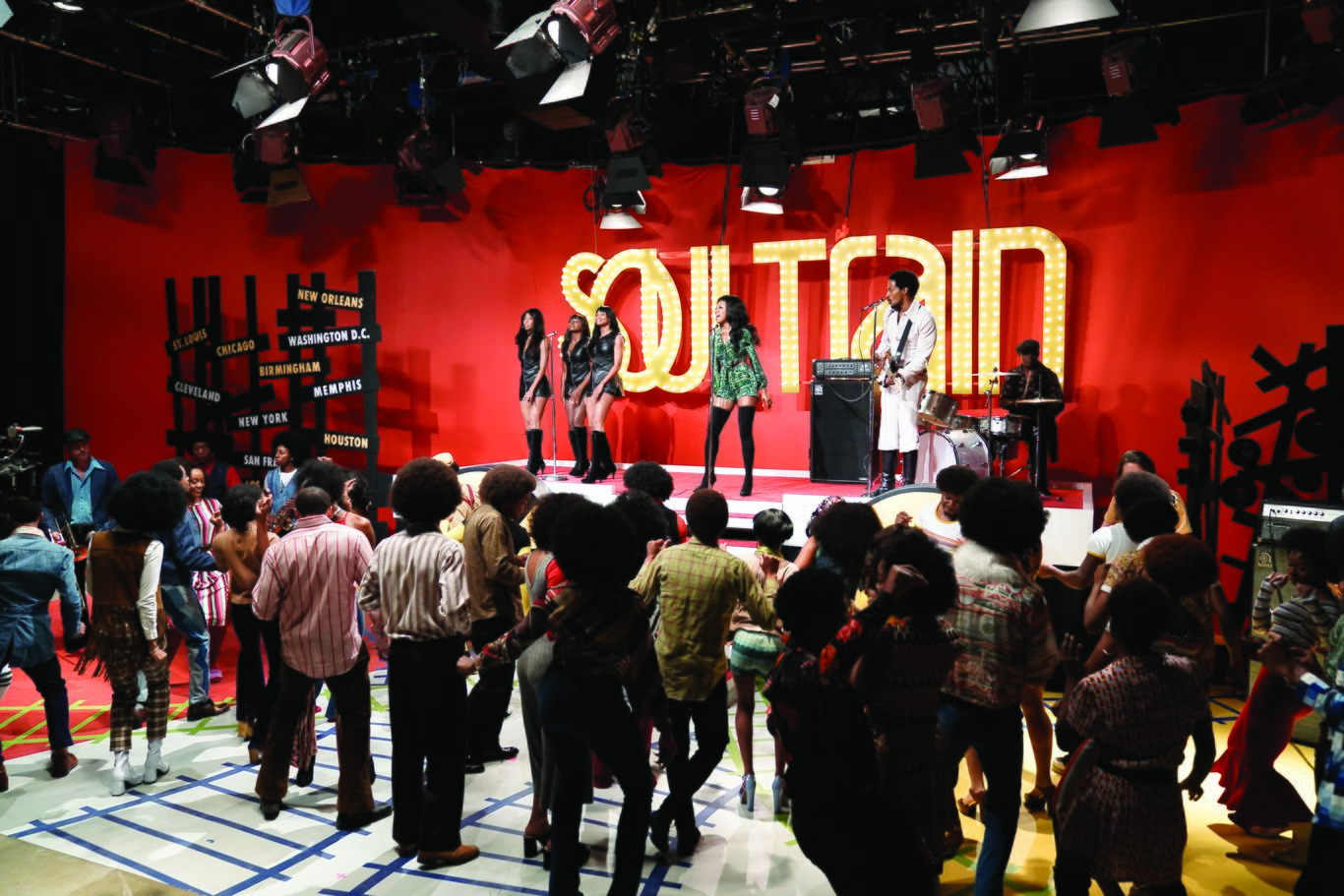 From day one, producers for American Soul made it clear that they did not want to make a Soul Train documentary. Instead, the ten episode television series embodied the spirit of Soul Train by embracing the music, culture, design, fashion and social consciousness of the era. It proved to be America’s introduction to black popular culture as the latest trends evolved and entered everyone’s living room, which soon became an impromptu dance floor. Created by Don Cornelius, Soul Train featured performances by influential R&B, soul, dance/pop and hip-hop artists. The weekly Saturday program served as a portal to the black community for mainstream America.

Tony Cornelius, son of Don Cornelius and executive producer of American Soul, wanted to create a television series that captured the essence of Soul Train but reveal the story through the eyes and the experiences of those impacted by the program. He desired to show the world how his father’s innovation had transcended the social norms of the times and broke through barriers previously unchallenged.

Soul Train was originally created in Chicago and moved out west to Los Angeles for national syndication.

In this day and age, designers are constantly asked to replicate existing settings in far-off locations. Nothing was more challenging (and heartbreaking) than to take a show whose origins and success evolved in Hollywood and place it in Atlanta. It meant taking the quintessential elements that make up Los Angeles (space, light, shadow, iconic landmarks, architecture and landscape) and transferring them across the country. Sometimes this was done successfully, at other times it was a leap of faith. One of the saddest and yet most successful sets was the exterior studio that connect to the actual interior Soul Train set on stage.

Nothing is more important than research. Google has been the go-to for content for its scope and ease of access. Not everything is on the net. We as ADG members do not realize the invaluable resource we have in the research library services and archive on the ground level of the Los Angeles offices. With the help of Barbara Hall and Leslie Diller–Zollo, I was able to find and view some of the original plans of the studios and stage sets for the show created during the period.

One of the first sets to open the show would be the introduction to the Chicago studio and the first Soul Train show aired locally. There was limited footage and research of the actual show. In order to bring the viewer into the world, the episode opened with a Steadicam shot starting from one studio, through the corridors, and into the studio party that would become Soul Train. With little footage and a few stills, we were able to create the basic elements (train, caboose, graphics) of the original Soul Train set.

The Lot and Studio (Los Angeles):

To create a world that was believable as a Los Angles lot involved careful planning. One of the critical elements was a studio stage that was connected to a “Los Angeles” studio lot. One key relationship was the connection from the interior (stage) to the exterior studio via an existing exit door. Once this connection was established, the door became part of the exterior stage elephant door. Once outside, we developed various set pieces, both physical and digital, (Sketchup) to extend the world for current and future episodes. Because the studio set was located next to an existing exit door, the elephant door could act as a connective set piece.

Because this is the first time the viewer is introduced into the world of Soul Train, the period needed to be sold through set decoration, graphics, technology and most importantly color, to pull the viewer into the world of Soul Train LA. To demonstrate the growth and popularity of the show, an arc was created over the course of the ten episodes of what the set would look like on camera through the various iconic set pieces and graphics. Equally key was coordinating the many performances to the various artists and the colorful backdrops.

Lauren George was the dance choreographer and one of the core members of Soul Train. Because she was an artist I felt it was a good opportunity to introduce one of California’s many iconic architectural features. I thought a bungalow was an ideal choice for a professional artist living in the Los Angeles area.

The Clarke family consisted of Simone, Kendall, Brianna the mom and Joe the father. (Who is revealed to be a Vietnam veteran, a sign of the times.) I wanted to create a space that reflected what a home meant to people of color during that period. They are a family of artists who had to make sacrifices to create a stable core in this unstable period. I felt a Craftsman bungalow was best suited for a family living in the Compton community of Los Angeles, with artistry and craftsman detail. Throughout the home were familiar details (wallpaper, magazines, furnishing and appliances) that many on set recognized from when they were growing up. It was the details sourced throughout Atlanta and the various prop houses by set decorator Natalie Pope and Carla Dzenowagis, her buyer, that sold this world.

Guy’s and Dolls was a club situated in the heart of the black community of Los Angeles . Guy’s and Dolls was to be an anchor that has the same cultural emphasis as Soul Train. A place to be seen and be in the scene, a center of the music and its elite trendsetters. It was really important visually to create a place one could believe would exist during this time period, whereas NY had Studio 54, LA had Guy’s and Dolls, a transplanted club from the south through Chicago. Visually, I wanted to pull from some of the iconic clubs and restaurants (Perino’s, Ciro’s) of Los Angeles’ past with visual cues from well-known music venues (Lenox Lounge, Cotton Club) of New York’s and Chicago’s past. I also wanted to pay homage to Paul Williams, a black architect that created some memorable and iconic Los Angeles buildings (LAX Theme restaurant, Beverly Hills Hotel, Sak’s 5th Ave).

Ma Mabel’s was the community patriarch that served up some of the best soul food west of the Mississippi. The design’s origins involved merging two institutions (one in Atlanta, the other in Los Angeles) to create a believable world on stage that would exist during this time period. To help sell the concept, layers both real and artificial were created on stage. Greens, parked cars, people entering and exiting, walking past on sidewalks, etc.

Some of the most difficult sets to conceptualize for a first-season series and still manage a descent look are swing sets. Swing sets are especially difficult when limited by time and available space. My challenge on this series was creating three clubs (Black Bird, Dugan’s, Pete’s Place) within a single space, essentially a box. To pull off this challenge, I needed the help of various departments (construction, set decoration. grip and electric) to coordinate the logistics within a tight space and on a tight schedule. Because the clubs were shooting back to back, I had to conceptualize a unique design feature for each club.

Black Bird was designed to be a rustic yet intimate club with modern design cues. I felt it should be a club that reflected the passage of time, hence the ghost (Black Bird) sign from its past life as cleaning powder factory. I also created multi-layered stained wood panels that were popular during the early to mid-seventies. The up-close-and-personal vibe reflected the vulnerable state one of the characters was going through during this episode.

Dugan’s was a club designed to capture the energy and atmosphere of juke joints of the past. That hard-to-find club tucked back in the corner in the French Quarter or in the village in Manhattan. Part of that look involved building a mezzanine level that hovered above the bar. To further give Dugan’s its own uniqueness, I created large upholstered tuck and roll panels along the wall that complemented the booths. Conceptually, I wanted to recreate a breakout moment the characters were experiencing during this this episode. As swing sets go, I could not have pulled the logistics of three clubs in a single space without the cooperation of the crew members.

Saturday television in the 1980s was an hour-by-hour journey toward maturation. You would start at 8 a.m., a mere child watching Super Friends. When you were old enough to still be watching TV around noon, the pleasures of Wide World of Sports, or else some schlocky tween comedy beckoned. Later in life, and in the day, budded American Bandstand, with its apple-cheeked rendition of dance-floor liberation, and its frequent companion on the syndicated schedule, Soul Train, a black-music show existing at a sweet spot of pop culture and folk tradition—the vernacular funk of the dancers articulating the essence of the hits. It showed you how to move in step with the moment. In a 2013 book titled Soul Train: The Music, Dance, and Style of a Generation, Questlove hails the show, which aired from 1971 to 2006, as “not only a transformative cultural moment” but “a sibling, a parent, a babysitter, a friend, a textbook, a newscast, a business school and a church”—“the master of teaching you lessons that you didn’t know you were being taught.” ADG