Perspective
Perfect Harmony building a unity of place and spirit 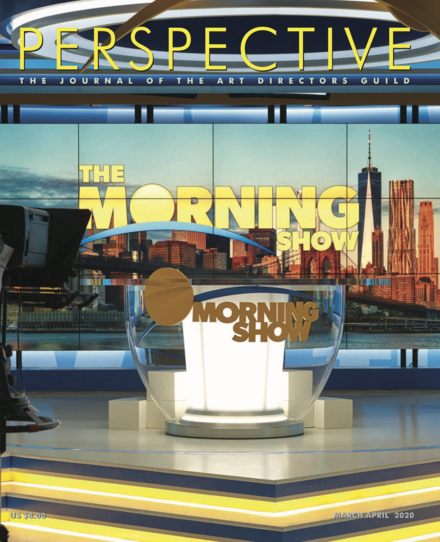 Perfect Harmony is a wonderful half-hour comedy for Fox/NBC. It is set in Kentucky and shot entirely in LA. As one can imagine, the biggest design challenge was creating the sense of place.

I was fortunate to have a longtime friend as location manager, Robert Dohan, who was willing to go the extra mile to achieve the look. We quickly understood we needed trees—LOTS of trees. Tree environments were our biggest allies, within those locations our world became realized.

The executive producer/director Jason Winer was enthusiastic for a design that was richly toned and cinematic rather than the familiar formula sitcom style. This allowed a chance to deliver in texture —with warm colors and lighting opportunities delivered by the extremely talented director of photography, David Jones.

The show wanted realism and authenticity, but it was also important to throw a little “Bling” into the mix and add highlights that brought its world to vivid life.

On Perfect Harmony, the design focus was to create a nurturing Kentucky vibe. The show’s hero living on a family houseboat set the Art Department in motion.

First, it was crucial to find a body of water that worked, in this case, on Disney Ranch. The houseboat design was scaled to fit right into this landscape effortlessly. I wanted an “Old-School Generational Family-Owned” feeling which drove the design with elements such as a loft bedroom, rich paneling, vaulted ceiling and a salvaged skylight.

The houseboat was built in the Fox mill, then disassembled in order to transfer it to the lake. While it was being built, a foam pontoon and deck was constructed on the lake to receive the pieces. The houseboat was reassembled and then painted, aged, decorated and eventually towed to its final resting place, next to a small existing dock. It fit flawlessly.

After shooting the location sequence, the houseboat unit came back to the stage where it played for the entirety of season one. This stage setting was enhanced by a fabulous 180° translight which was actually a painted backing that JC Backings re-photographed to be able to work as a backlit lagoon day and night drop.

All of this was done in record time.

The Second First Church of the Cumberlands was the most important location that needed to be found for the pilot. In the deep recesses of the San Fernando Valley lies the community of Piru. It has a 120-year-old intact church that provided a wonderful backdrop to the story. An adjoining cemetery was added to complete the look and narrative. Upon receiving the word that the series was picked up, the Art Department started the process of designing a stage version of this church.

The production had a wonderful facility allowing us to line up five uniquely different sets for season one, the church being the most beautiful with its stained glass, woodwork and direct sightlines from room to room, making it quite an impressive place to shoot.

The organ pipes were found in Ohio, the fixtures came from a variety of prop houses and most importantly, the vintage seating was rented from the original church, which had subsequently been sold. The wind was at our back to put this type of set together with such authenticity.

It’s important to say that actors and visiting directors feel very at home in every one of our sets—a compliment to the crew and their passionate approach to the work.

The center of the show’s universe in Conley Fork is the Moonbow Dairy diner. The design was to be true to its small-town roots while still giving it the styling it deserved. We were fortunate to find an exterior location to establish the small-town setting, giving us a chance to shoot a street translight day/night drop for the stage set. A pair of existing buildings on the main street of the location were transformed into a memorable Moonbow Dairy exterior.

On stage, the Moonbow interior is a rich blend of real life, history and charm. It serves as a playful backdrop to the show’s humor while not being over the top. I wanted to create an inviting space that is simultaneously intimate and friendly.

The designer is only as good as the writing he or she is designing for. In this case, writer/showrunner Lesley Wake Webster created a very genuine world. Her sincerity was so helpful when making design decisions. Together, we carefully crafted a reality that never upstaged the comedy but merely enhanced it. This technique lifts the piece and makes it more organic and interesting while never losing its value of art or magic. Perfect Harmony was very ambitious and at the end of the day—so memorable. ADG