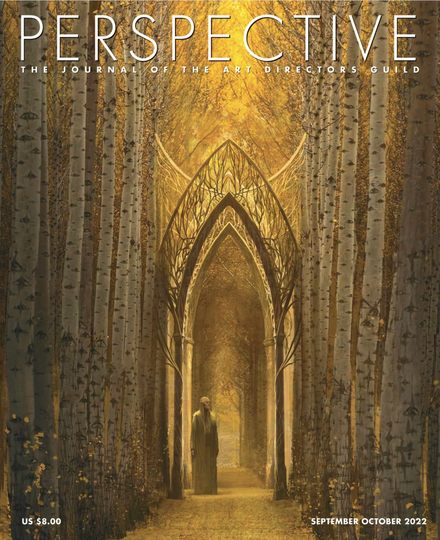 I’ve always wanted to do projects that were really different from each other. I loved that I did Zero Dark Thirty, a war movie, then Detroit, a period thriller, then Top Gun: Maverick, which was big.

When I read Severance, it felt like Twin Peaks, something you could watch a million times and still try to figure it out. Severance is about the work/life balance. Ben and I laugh about fighting the work/life balance making this show. We started before COVID for five months, and then it shut down. I came home to Los Angeles, and I worked out of my house for four more months.

I met Ben through the cinematographer, Jessica Lee Gagné. I did a quick look book for him, and we clicked together instantly. Dan Erickson’s writing is amazing, but it didn’t have a look, it was just an underground office that went forever. It felt like the underground had to be its own special world. I wanted to customize everything in the show, so the audience wouldn’t have seen it before.

It was really a Ben Stiller show. Me and Ben, Dan the writer and Jessica the DP, fleshed out the tone, the humor, the aesthetic, how to shoot it, the “innie” world versus the “outie” world.

The Art Department had four concept artists, including Hugh Sicotte, who worked every day on renderings for the Lumon founder paintings, five Set Designers, two consecutive Supervising Art Directors, and a Graphic Artist, Tansy Michaud, whose work is mind-blowing.

I didn’t want technology to peg when this was happening, whether it’s ten years ago, or ten years from now. I tried to use as much analog as possible. I didn’t want any new mobile phones, but that’s how people communicate in the “outie” world.

Severance was shot in New York, where Apple had new stages in the Bronx. I thought the Lumon headquarters exterior should look like the beautiful John Deere building in Illinois, designed by Eero Saarinen and Kevin Roche.

Bell Labs, designed by the same team, came up as a possible location for the Lumon exterior. It’s now a mall with around a million square feet of space that was the original Bell Telephone Company, where they designed the satellite and the phone. It’s in New Jersey, and it was spectacularly restored. The production convinced the owners to let us shoot there. We did a lot of visual effects to remove stuff on the roof and most of the trees around it. We wanted the glass structure to look monolithic.

Looking at ’60s and ’70s office spaces, most are super-sterile, incredibly professional, and beautifully designed, with a desk set, a phone, a Rolodex, one pen, a calendar. They didn’t have any personal items. That was the look the show wanted.

Everything on Lumon’s “severed” floors had its own playful world. I referenced the ’60s Jacques Tati film Playtime. The Lumon workers who are severed are “born” into this office in the boardroom where the severance takes place.

In episode two, the severance brain surgery procedure is shown. The production had a neurosurgeon tech, Vijay Agarwal, who took us through the procedure—not that the severance chip would work, but we learned about how ketamine can take away the last hour of your memories. Pretty much all the surgical equipment in the scene is real.

I thought: Let’s make a rule that Lumon doesn’t buy anything from outside vendors. They manufacture everything themselves underground, so no one would ever know what they’re doing. Once they’ve invented the Lumon computer, it lasts forever. If they have their own computers, they’d be like iMacs in the ’80s, interesting to look at, but practical. The tech was designed to actually work for the actors.

The DP Jessica, set decorator Andrew Baseman and I and had a lot of conversations about how the show was going to be lit with practical lights as much as possible. Sometimes the shape of the lighting fixtures would give Jessica the lighting she wanted.

Macrodata Refinement, aka the MDR, is the severed department where Mark (Adam Scott), Helly (Britt Lower), Dylan (Zach Cherry) and Irving (John Turturro) work. They sit at right angles to each other at a square green desk, divided by movable partitions, in the middle of an enormous rectangular room with a green floor. Rectangular shapes are repeated throughout Lumon; it felt nice to have longer spaces.

The MDR is basically a grassy playground. Dan wrote, “Four desks in a very large room.” I wanted to make this a desk that they could interact with. We knew we were going to spend a lot of time here. This space had to be visually arresting. Jessica had ideas for framing in these office spaces that were quite wide—wide lens, eerie, mysterious. We decided the ceiling needed to be low, to feel claustrophobic. The employees are monitored on security cameras all the time. We were playing with how would you watch them? If they were in a smaller room, they’d never leave their desks, but in a big space, it’s fun to watch what they do.

All the Lumon sets have practical ceilings that can be flown up and down remotely, because the techno-crane couldn’t get far enough up above the set otherwise. There’s no lateral ceiling movement anywhere. The center section of the MDR ceiling was twenty by thirty feet, with hundreds of programmable lights.

Cobel (Patricia Arquette) is the senior Lumon executive on the severed floor, the one person there who is not severed. Just as the green in MDR is like grass, the blue in Cobel’s office is like the sky.

Cobel’s office gets a little artificial sunlight, because she is conscious of what sunlight is, and that she’s not getting it. She has a triptych painting of a stormy sky behind her desk. I loved that each severed character would come in, not know what the sky is, look at her, and the painting, and be wowed. And she is a storm.

At Lumon, the break room is where disobedient employees are broken. Helly is forced to read a formal apology here over and over. Dan wrote
that it was projected on a wall. I wanted to see the yellow words projected on her somehow, like it was being burned into her face, embedded into her brain. I came up with this little desk where Helly sits across from her tormentor, Milchick (Tramell Tillman). He can see her, but the way the lighting was positioned, she’d never be able to see him, just the letters on the glass. The set’s very Escher, it has no right angles. I had all the walls leaning in, so there was always a weight pushing down on Helly.

The text projection was practical,as was most of the show. I like to give the director the ability to shoot without being compromised about camera angles, or anything C else. I also think doing things practically is important for the actors.

Lumon was founded by Kier Eagan in 1866 and has been run by his descendants ever since. There are areas devoted to the Lumon founders, including a display of lifelike statues of each Eagan. Dan, Ben and I decided to do something like the Disneyland US Presidents exhibit.

There’s also a perfect replica of Kier’s house and front yard. When the show was scouting remotely, there was a museum in the Bronx that had an amazing Brutalist building, a beautiful grassy area and a vintage house that we referenced.

The production had two soundstages with white Lumon hallways. The first had at least a hundred feet of hallways, as well as the MDR, the break room, the boardroom and the staircase. There were two main hallways that were a hundred forty feet long, with intersections.

The hallway walls and corners were completely changeable. Sometimes an end was removed and VXF would do a set extension, so it could look like it was five hundred feet long. There were doors that are interchangeable and glass walls that were inserted to see into the conference rooms.

The hardest set was probably the elevator, which is shoulder-width wide. When the face of an actor is seen in the elevator, it’s shot with a robotic camera on a robotic arm that travels about thirty feet in less than a second, just enough to alter the parallax of their faces to the background. The elevator exists as both part of a hallway set and a separate set that breaks apart in pieces, because the camera’s got to wrap around it.

Because outside-world Mark has no memory of his work life, he doesn’t realize that his next-door neighbor is actually his Lumon boss, Cobel. Mark and Cobel live in a community where the houses are of different sizes, but all are blue, with peaked roofs. Location manager Mike Buonanno and I found a community where the houses really were Lumon blue. It visually arced up into the hill, it felt nestled, it had a good view across the river into where visual effects could be used to show the town. But also, each one of the houses is individually broken up in a strange way, which felt like the way Mark is very fractured. It was aesthetically beautiful, but hauntingly strange. Mark’s house interiors and Cobel’s house interiors were built on stage. They’re built at different heights. Cobel’s house interior set is about twenty feet in the air. The crew built the side of each of their houses that were facing each other onstage. They could be shot walking up to their houses on stage, and then walking inside, and then looking out a window. Mark can’t see Cobel, but she has vantage points through every one of her windows into his place.

Mark’s sister Devon (Jen Tullock) is married to writer Ricken (Michael Chernus). The cover of Ricken’s new book is bright orange, which contrasts with the Lumon blues and greens. Ricken is the most accentuated character in the show, which is why their house has bright colors.

The original house that I picked couldn’t be used because of COVID, the original owner was ninety-six. Coincidentally, he used to work at Bell Labs. We ended up shooting at another Frank Lloyd Wright house in the same Pleasantville neighborhood.

One thing I loved in Dan’s writing is the question: Why are we doing things the way that we are? We can’t keep going this way.

The possibilities and the world of Severance are endless. I thought about how the creators of this space were inventing these severed employee characters, and Lumon could make the employees do whatever they want. Dan’s writing was the license to do that, and Ben gave me the license to do it as a designer.

Designing Severance is probably my most experimental work. The production wanted to create something super-fun, and super-strange, and powerful. We all did it together, and we were all on the same page. You don’t get that very often. ADG