Perspective
Designing a Debacle THE DROPOUT 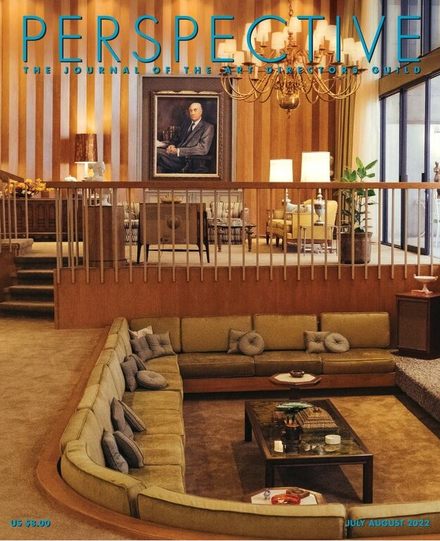 The first time I saw Elizabeth Holmes, my scientist husband Dan was watching a documentary. I thought it was a boring science story, so I told him to turn it off. Knowing the drama behind the story, he said, “give it a minute.”

For the most part, nothing scandalous ever happens in science. For any scientist, the concept of Theranos made no sense, a full array of blood tests from just a single drop of blood. Technology as revolutionary as this doesn’t just appear out of nowhere. How Elizabeth Holmes—once an unknown college dropout entrepreneur—and her company Theranos duped both scientists and high-profile investors for more than ten years was uncharted territory.

Of course, this is what hooked me. Elizabeth Holmes is a woman who at the age of nineteen, founded a biotech startup on a shoestring and leveraged it to a billion-dollar corporation, becoming one of the most celebrated and wealthiest women in the world. Initially, I empathized a little too much with Elizabeth. She was a woman with a dream. She wanted to democratize healthcare. But at what cost? Behind the curtain, the Theranos technology never performed properly. Maybe Elizabeth believed the technology would catch up with the dream. I think the obstacles along the way blinded her to the shortcuts she made to overcome them. What she did was terrible; she compromised the health of real people. Plus, science is unforgiving; the consequences for failure are permanent.

When I began work on The Dropout, I became a little obsessive. And as it turned out, I wasn’t the only one. Everyone involved in the project was equally obsessed. We wanted it to look as authentic as possible—we were more worried about the science behind the technology than Elizabeth Holmes was. Luckily, my husband and his colleagues were able to assist on the scientific aspects throughout production.

The show was logistically tricky. There were lots of sets, lots of locations and not enough money, but what project isn’t ambitious? The production decided to shoot half the series as one block, so during the eight weeks of preproduction, the Art Department’s priority was to find all the locations for the first four episodes. In the beginning, we spent every hour in a van looking for locations and the tech scout was seven days long. In between scouts, I would run to the Art Department to look over the progress of a handful of swing sets and the preliminary work on what would be the largest set, the final version of Theranos, which we called Pagemill. The first four episodes included a complete Apple Store set with period props and dressing from 2007, a Walgreens, Beijing in 2003, Elizabeth’s childhood home, three different versions of Theranos in East Palo Alto, Sunny and Elizabeth’s Palo Alto condo, Stanford University, and a few others. Pagemill was our largest and most ambitious set which also showcased the evolution and height of Theranos.

Because Theranos was so secretive, there weren’t a lot of existing photos beyond a few publicity shots from Glamour magazine and other profile pieces on Elizabeth. I found a few empty office photos from the Glass Door website and some original renderings from Clive Wilkinson, who created the interior design for Theranos.

The original plan was to find a modern-looking office and merely decorate it in the style of these images. But with COVID, this was immediately shelved because it was a time when companies thought the world was still weeks away from going back to work, so no one would let us shoot in their offices for the two months that were needed. The production started looking for an undeveloped office building with no tenants and no development, just a shell building. We found a space, it even had a finished lobby and cafeteria. The tenant turned out to be the Siemens company, which was ironic seeing as Theranos had used modified Siemens machines to defraud investors and deceive patients.

I got lucky with the design because my husband knew a scientist who was currently working in the old Theranos building. He acquired a diagram of the office space and great photos of the interior. It had not been redecorated, so, I had a fairly good idea of what it should look like.

My personal vision was to create a set that spoke to the excesses of high-tech office design. Huge open plan, a veritable fishbowl’s worth of glass, pod-like “breakout” rooms, three conference rooms and a brainstorm room. Of course, Theranos already had giant quotes by Yoda and others written on the walls. Truth is stranger than anything I could have invented.

I knew I would need a computer model for production to understand the scope of the space. The show’s Set Designer, Jean-Paul Leonard, is an expert in SketchUp and created a beautiful model and technical drawings. I had very little time to supervise because of scouting, so Jackie Kay, the Art Director, became indispensable in updating me on the progress. The budget was approved. We arranged for five weeks of installation, which turned out to be not nearly enough time.

I have been working in the Art Department long enough to know that there is a no-fail policy. I have never worked on a show where a set didn’t get finished in time to shoot it. Too much money is involved to let this happen, even if mistakes are made. So, I was a little foolhardy when I scouted the office space. I even oversold the amount of set we could actually build and later was horrified by the enormity of the task. The final project was forty- five thousand square feet.

Art Director Jackie Kay tracked a number of statistics throughout the project. It would take three miles of cable, forty thousand square feet of carpet, one hundred period desktop computers, one hundred fifty desks, etc., and all during a national supply chain crisis.

At a certain point, I began to get cold feet. The space looked incredibly long and impossibly narrow. There were some walls not in the original site plans which blocked the sweeping views I’d envisioned. Also, I had promised the creatives that I would take out the existing T-bar ceiling to give the space the industrial look that the original had. The crew would have to remove some walls and disconnect some existing electrical and plumbing. We would have to have an engineer double-check to make sure we didn’t remove something structural. This turned out to be more time intensive than I had anticipated. Two weeks evaporated and the ceiling was still intact.

Above the ceiling was a mess of cables for lighting, pipes, air conditioning and insulation. All the lighting would have to be reinstalled after the ceiling was gone and all the existing pipes and duct work exposed would have to be painted one color. Then the show would have to restore it all to its original state after wrap. The coordinator estimated this could be an additional quarter of a million all in. We decided the result wouldn’t be worth the time and risk, so we cut it. It turned out to be fortuitous as we needed the extra time. Many thanks to construction coordinator Star Fields, who harassed me every day on the subject of the ceiling until I gave in and canceled it.

The next step was ordering materials. My first dose of reality for just how big the set was going to be was in the astronomical amount of carpet we needed. The availability of materials was constantly and abruptly changing. Something could be plentiful one week and gone forever the next week. The volume of dropped orders, incorrect shipments, and yes, even miscommunications by the overstressed construction and Art Department, made us all shift into survival mode. We had to make whatever arrived work. By the end of the installation, the crew was piecing together carpet in elaborate computerized cutting patterns to avoid any waste. The people who had to install the flooring could be unreasonable, but they also were also incredibly patient and skilled. Many kudos to Assistant Art Director Lorie Wallick, who never gave up and saved the day many times.

Meanwhile in set decorating, the sheer number of items that had to be acquired for this one set of Theranos was beyond daunting. Where I might have given up, I was constantly impressed by the decorator, Kim Leonard, and her crew’s ability to make it happen.

With the crazy amount of office space and the furniture needed to fill it, the set also needed individualized dressing for every workstation. Besides the office, the crew needed to furnish two individual high-tech laboratories. We went to order forty-five lab tables and out of the blue, our vendor couldn’t provide them. Undaunted, Kim tracked down the manufacturer in Mexico, called them direct and arranged for them to be brought to the border of San Diego and picked up, with a week to go before shooting.

Set decoration also ordered premade metal lab cabinets, but when they were delivered, half of them were missing. The company promised to deliver the rest in a week, which was the Friday before shooting, but they only delivered half of those already missing. Construction spent the weekend mocking up the missing quarter of the cabinets, to be replaced when the others eventually arrived.

By far the craziest story was that of the five Siemens machines. Siemens blood testing equipment is key to the story, but it costs hundreds of thousands of dollars to purchase them new and they’re not available for rent. One was found on eBay and the plan was that the Art Department would make the rest later with a 3D printer. We got the first one and put it to work immediately as the single Siemens machine in all the lab sets. For a key scene when it is discovered that Siemens machines are actually doing the lab tests instead of the Theranos technology, we knew we would need five more. Kim found the five through a medical supply man in the South and arranged for the seller to drive them to California a week before shooting. Halfway through the week, the truck was involved in an accident in Colorado. After a police report and insurance investigation, a new truck was on its way two days later. After that, the new truck was pulled over, suspected of drug trafficking. They finally arrived on the Saturday before shooting.

I can honestly say I would have failed with a different crew. The Art Department believed it could be done based on blind faith. The construction crew never gave up even when I was sure we couldn’t do it. We did finish, but there were some truly horrifying moments along the way.

The near-death experiences of this Art Department were numerous. By the end, I felt like Elizabeth, a bit of a fraud, with a house of cards set to collapse. That final day, walking through the endless number of offices, past the circular glass conference room and the “Brainstorm Room” and on toward Elizabeth and Sonny’s office, the feeling of accomplishment made me so elated. It looked glorious. Unlike Elizabeth, my crew preformed above and beyond what was expected of them and saved the day, which I knew they would. ADG