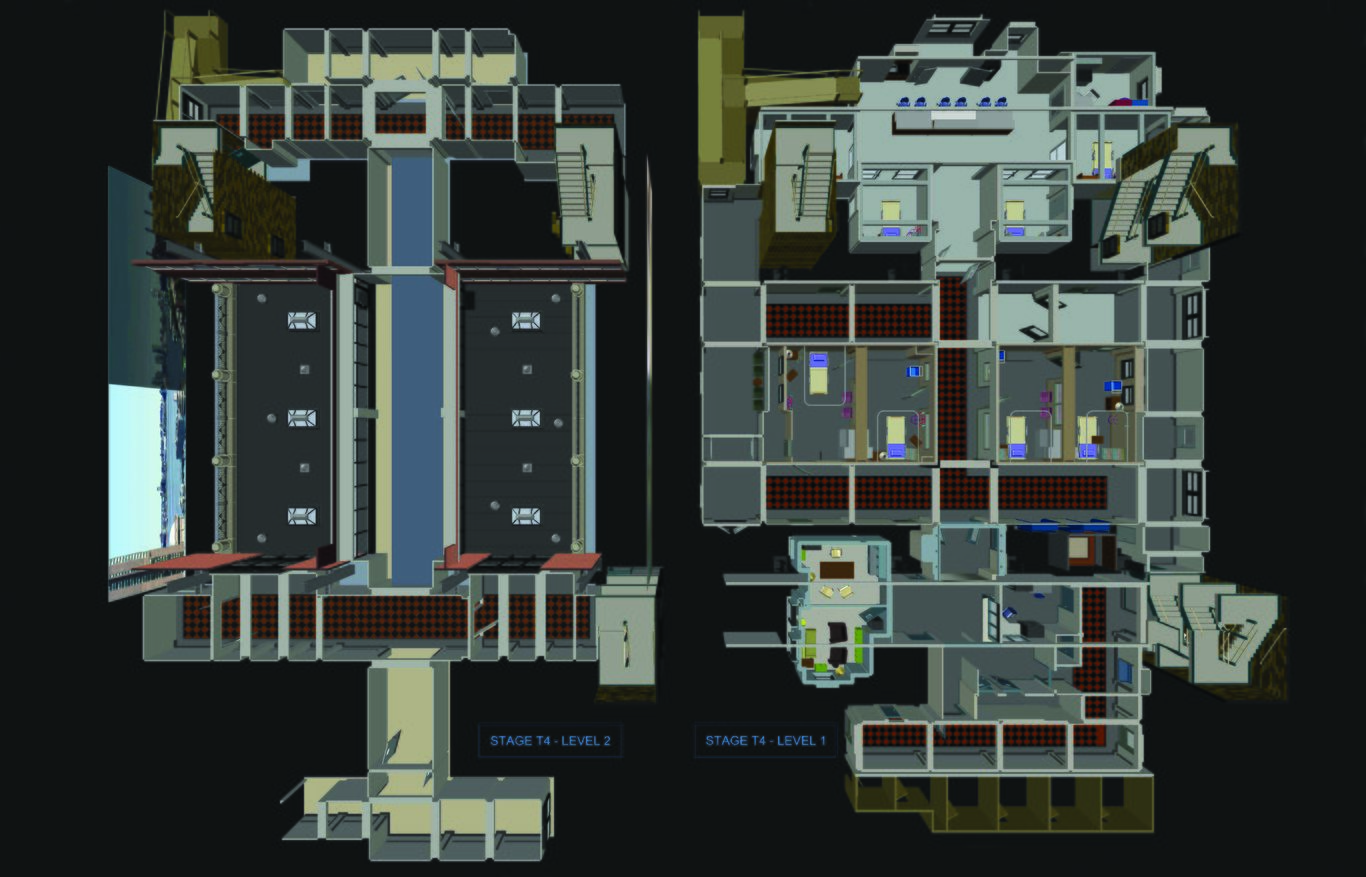 Perspective
A Medical Maze THE MULTILEVEL WORLD OF NEW AMSTERDAM 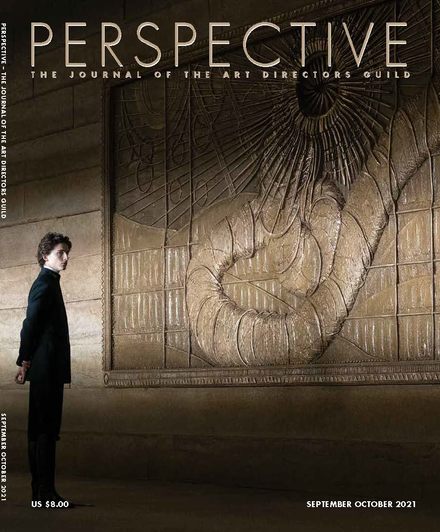 I was hired to design the second season which had extensive existing sets designed by Kristi Zea and Audra Avery, as well as established locations, including three floors of King’s County Hospital in Brooklyn, New York.

The series is about the daily workings within a large public hospital featuring five principal characters working in four departments, emergency, psychology, oncology and cardiology/surgery. Between these are long corridors connecting the departments and sometimes adjacent buildings. It is in these hallways that the characters often converse, and sometimes intercept and confront each other, as their stories play out.

The show features both the positive and negative sides of the medical profession with stories dealing with doctors, trustees and support employees maneuvering around the system to provide quality and equitable healthcare to all their patients. While dealing with the difficulties of providing care to their patients, there is always a sense of optimism that emerges out of the many setbacks that occur along the way.

With this in mind, the design was developed and the creative team worked under an overall visual concept of the optimistic “light at the end of the tunnel.” King’s County, like a lot of older hospitals, has very narrow hallways and in some cases, no windows looking into the outside world. Those windows that do exist are often sealed closed. Whenever possible, the design emphasizes that visually with the selective placement of interior windows along, and at the end of, long hallways, which allow in light even though the outside world is inaccessible.

I had learned from working with great Production Designers as an Art Director that while you want to be accurate and honest about the design, you also want to be conscious of designing what a contemporary audience will accept and believe to be true. I found that to be very insightful and have taken that thinking to my work as a Production Designer. I can also add that I have found that the viewer is more likely to notice something is missing as opposed to analyzing the accuracy of what is there. This thinking helped me greatly as I started work on what will be my first project that is set extensively in a hospital.

Medical accuracy is very important on this show, and we are constantly consulting our medical advisor to make sure the medical aspects of the script are accurate. But situations do come up where what is accurate does not always serve the story visually. In these cases, some adjustments are made to help better tell that story. The sets are no exception, there are times when adjustments are needed for the design, set dressing or graphics, to suit situations where in reality, they would not exist. But as long as it does not appear that something is “missing,” we have done our job. This extends to being conscious of what the viewer will accept, and the goal of the Production Design is to ultimately not be noticeable. The last thing the production would want to provoke from our audience are questions like “Where are they?” and “What is that behind the actor?” As a designer, I prefer the viewer not knowing what was done in the design of a particular set and just accepting it as credible.

Established in the first season, the show had an existing emergency department and an ICU department set on the sound stages. While the emergency department appears in nearly every episode, the ICU was less utilized. So, the Art Department had to devise a couple ways to convert the space into other wards by resurfacing the existing walls with modular panels. We also reconfigured or replaced the central nurses’ station.

As a result, we were able to create an obstetrics and pediatric ICU department within the existing footprint.These adaptations have proven to be useful over the course of the season when creating different departments as they come up in a given episode.

King’s County had a distinctive red and black asphalt tile floor running along their corridors. When the production built the sound stage sets, the floor pattern was replicated in the set hallways as well. It creates a maze pattern with an almost trance-inducing effect during the long walk and talk hallway conversations and helps add to the situations that the characters have to overcome on the show. With the obstetrics and pediatrics having the same footprint as the ICU, the spaces took on a subliminally unrelenting quality that plays off the frustration of the characters often “going in circles” both emotionally and physically in the sets. As in actual hospitals, the footprints are often the same between different floors but the walls are both similar and different enough to be confusing and disorienting. I was hoping that by creating differences among the similarities, it would help the audience empathize with the characters’ experiences.

The second season ended prematurely due to the COVID pandemic on March 13. As a result of the pandemic, it was no longer possible to film at King’s County Hospital. Therefore, the decision was made to build on stage some of the offices and elements that were lost from King’s County for the third season. This gave the Art Department a unique opportunity to construct a hospital wing from the ground up. With connecting hallways and departments, we ended up building a two-level set on stage.

Bellevue, like many older hospitals, has physically evolved over the years, with new additions and retrofitted renovations of older sections. That look was part of the initial concept of the series and was the starting point for all the interior designs of the hospital. The crew built in transitions within the hallways where the action can start in an older section of the hospital, dating from the 1920s and ’30s, and end up in a more recently renovated section or a new addition before going back down to another older section. The black and red tiles mentioned earlier help delineate these spaces as well and create visual breaks as the characters go from one hallway to another. Since the set is a two-level structure, we were able to include finished staircases that connected the different floors as additional transition areas.

What was lost from the King’s County location were the long hallways that in some cases, connected one or more buildings within the hospital campus. The production had to build into the sound stage set the ability to add green screens at the ends of the hallways, allowing us to digitally extend the hallways beyond their physical length. By building this series of hallways and rooms, we built in flexibility to move walls and reconfigure hallways internally to accommodate the range of departments, patient rooms, meeting rooms and offices within the hospital as needed. While we were able to replicate some of the established locations from King’s on stage, we no longer had the flexibility to adapt other spaces for swing sets as we had at King’s County. So when building on stage, we kept as much flexibility as structurally possible so as to accommodate swing sets as needed.

By building these locations on stage, the production could also better accommodate the filming company, which was always having to negotiate the logistics of filming not only on a location but in a working hospital.

The second floor of the set featured a glassed- enclosed skywalk in the style of what exists at King’s County Hospital. Flanking each side with roof deck overlooking Manhattan on one side and the East River on the other. The skywalk is connected to adjacent hallways and stairwells to create an egress through the set making it possible to play a continuous scene starting at one floor and continuing up or down a staircase to the other floor. This new stage set has also helped create a cohesive visual tie-in with the other existing sets from prior seasons and has contributed greatly to a consistency not only within the work of the Art Department but with that of lighting and cinematography.

Working during the COVID pandemic, building and dressing this ambitious sound stage set in the short timeframe of eight weeks was no easy feat. However, the show was fortunate to have an incredible staff and crew who rose to the occasion with the support of both NBC/Universal and the show’s executive producers.

I am personally grateful for the entire Art Department, headed by Art Director Rick Dennis, set decorator Elizabeth Rodrick and our respective departments’ work on this past season, creating a quality product born of care and consideration, while staying on schedule and on budget in the age of the ongoing restrictions of COVID safety protocols. ADG