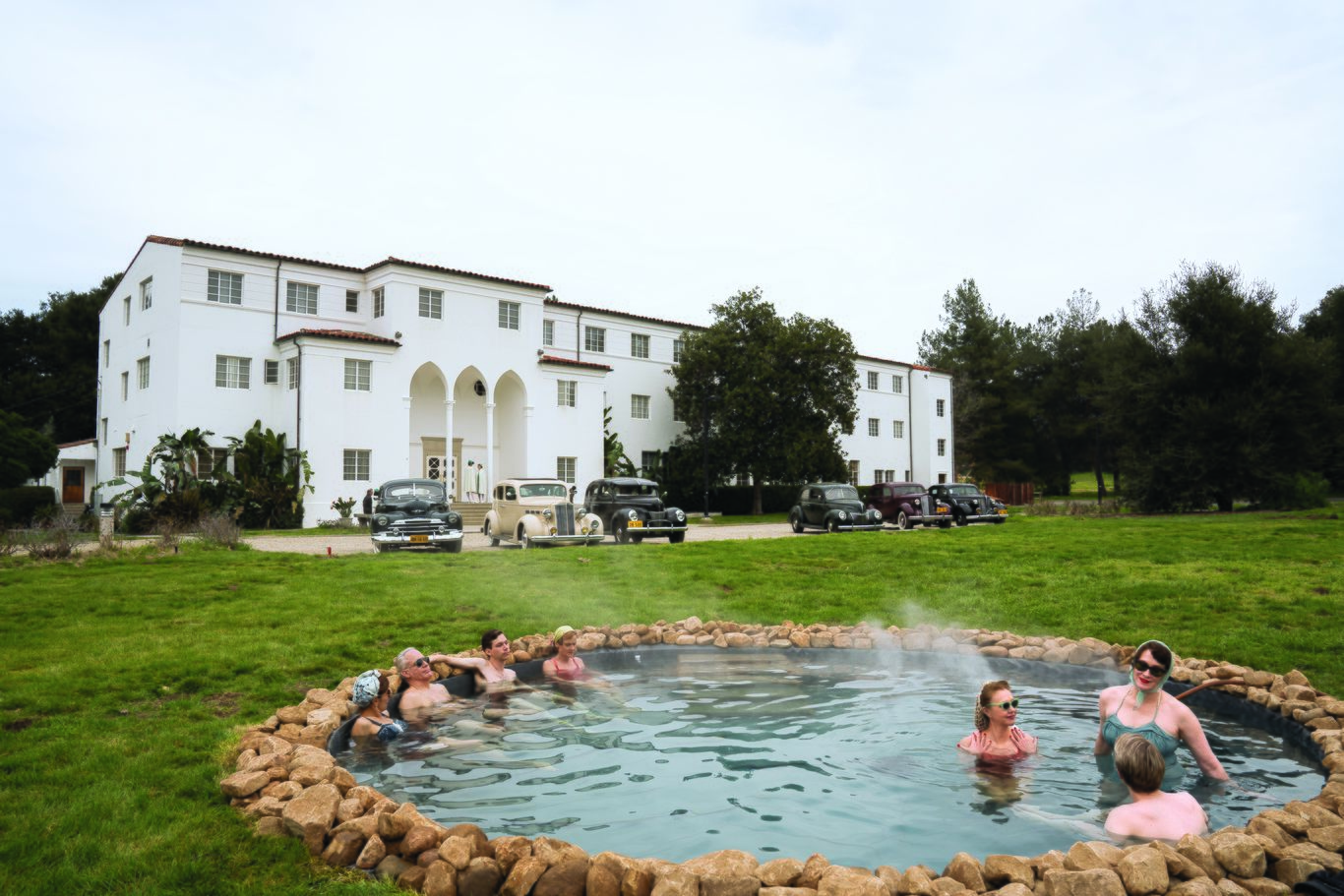 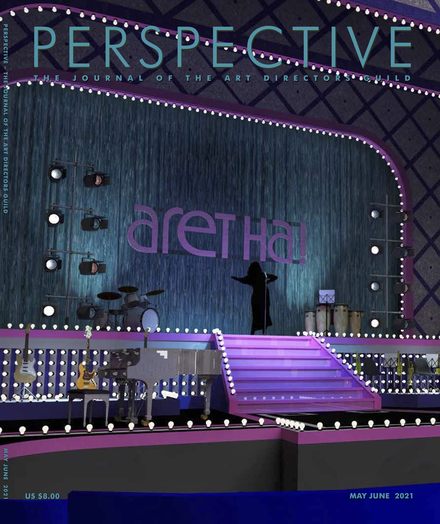 I’ve been the Production Designer on five shows produced by Ryan Murphy, four series and one film. One thing Ryan said consistently is that he likes
to base the design on an element that really exists or existed at some point in time. And I completely agree!

Basing a design around an element of reality can help counter fanciful story lines or characters, so in all the shows I’ve done for him we’ve started out by reviewing references. That doesn’t mean we copy these places or reproduce them on stage. More that we’ve used source materials as inspiration. This
is what I’d like to discuss about my design of the psychiatric hospital in Ratched.

It was a long road to the creation of the Ratched hospital set. Actually, it was a long, twisty mountain road (picture the opening of Kubrick’s adaptation of Stephen King’s The Shining). After Ryan offered me Ratched, we started by re-watching Milos Forman’s One Flew Over the Cuckoo’s Nest, the first cinematic incarnation of Nurse Ratched and her hospital environment. We then gathered an extensive collection of images of mental asylums in the late 1940s. They were sad and disturbing. Old and dirty environments, almost inhuman.

At our first concept meeting, the first thing Ryan said was this will be nothing like Cuckoo’s Nest. Instead, he wanted the psychiatric hospital to look glamorous. More akin to a movie star hotel than an asylum. It was that kind of counterbalance against the horrors of the story that I love to work with. The more extreme the subject matter, the more important it is to balance it with contrasting imagery.

Ryan also referenced Hitchcock movies such as Vertigo and the Northern California communities of Big Sur and Monterey as they appeared in the films of that time—buildings with lots of wood detail, atmospheric and mysterious foggy views of the ocean, majestic redwoods and so forth. I was lucky enough to have my number one West Coast location manager on the job, Robert Foulkes. Robert had to search high and low throughout the entire state to find the right locations. Often, he would hear about a promising location only to find out it had been torn down years ago, or renovated. I showed Ryan a few locations that I felt we could work with, but they didn’t have the heightened reality he was looking for.

Robert kept telling me about an old spa hotel in Arrowhead Springs near San Bernardino. It took weeks to get permission to scout it but finally he told me we had permission and the two of us set out. It was about an hour outside Los Angeles when we got to the turnoff from the highway. We started up a long twisty road with nothing around us for the longest time. And then, there in the distance, I saw a beautiful white building glimmering like a mirage way up in the hills. As we approached, bubbling hot springs appeared on both sides of the road and the building only looked more and more magical as we got closer. I found that Paul Williams had designed the building, and that this was the third incarnation of a spa that had existed on the site since the springs were discovered. And the interiors had been done by Dorothy Draper!

I had a good feeling, as I was very familiar with both of those artists from prior work with Ryan. It defined the glamour of old Hollywood! I took many photos and videos, and everything seemed really promising. During the research process, I had shown Ryan an image I had found of the solarium at a psychiatric hospital in Florida with curved windows. It was very simple in a mid- century modern style and he had responded well to it. When I walked into Arrowhead Springs, the first thing I noticed was the semi-circular solarium.

I went back to pitch the location to Ryan. After looking at the board of photos, he said: “That’s not what I asked for.” and I said, “I know, I know it’s not what you asked for, but it embodies the glamour that you wanted and it actually WAS a beautiful glamorous hotel.” He took a second look and decided he would scout it in person. It was love at first sight after we toured the location. Ryan turned to me and asked: “ What if we can’t get permission?” And I did something I rarely do—I promised Ryan we would get it. Cut to two months later—every overture we made to the current owners had been rejected. They just didn’t want anyone shooting there, it wasn’t even a question of money. Fortunately, we did have a backup plan, which was to build the hospital on stage. We knew all along that they were a lot of benefits to this plan—no commute to San Bernardino,
the proportions and textures and colors could be altered to fit the needs of the script, no non-period renovations or fixtures that had to be dealt with and so forth. Everyone reading this article knows the drill.

The Arrowhead Springs Hotel was large in scale and Ryan wanted to convey that size for the scope of the story. Fortunately, Art Director Alex Wei and Assistant Art Director Alex Linde had come on the director’s scout and surveyed the location while we scouted and had a full set of measurements. Then began the process of improving upon reality. For example, at the real location there was no long hallway and Ryan had noticed that during the scout. Now that the show was building our ideal version, we could have the long hallway with the dramatic turns that Ryan used to such a great effect in the show. I also modeled Dr. Hanover’s office on the solarium plan—which included a semi-circle wall of floor to ceiling windows. And, the entrance to the actual hotel lobby was nice but small in scale and not stunning, and the Art Department expanded the design there as well. Ryan always prefers stunning!

Of course, and especially in this case, the main downside of building the hospital versus using a location was the view out the windows. One
of the most dazzling aspects of the Arrowhead Springs Hotel had been the expansive natural surroundings—desert, mountains, and no anachronisms (windmills for example) in the way. Ryan is always concerned about a set looking fake because of a bad translight, or greens that never move, and although I believe he has at times used visual effects to create a view, her prefers to have something realistic in camera. I used heavy sheers on every window, and a landscape of foliage was created outside. To make sure the exteriors looked good in every shot, Assistant Art Director Danielle Osborne was assigned the role of staying on set and adjusting the greens to camera, aided by numerous mole fans.

Almost all of two stages on the Fox lot were filled just for the main parts of the hospital. We built most of the hospital on Stage 8—the entrance, lobby, lobby solarium, hallways and rooms, break room, Dr. Hanover’s office and the hydrotherapy chamber. Stage 8 is a large stage and there was barely a square foot left. On Stage 10, we built the patients’ common room (which included a dining area, recreation area, seating area and solarium. The rest of Stage 10 was used for the motel interiors and a few miscellaneous sets.

As always, when I can I prefer to use real materials for such an important set, I’ve heard some people say that using real materials (marble, etc.) isn’t really “designing” and I find that point of view embodies the opposite of my goals as a designer. The more I can create a believable world for the show, a world the audience embraces as real, the more I have fulfilled my role as a Production

Designer. And it also is helpful to the director and actors—many actors have said to me that the reality of the set actually helps them with their performance, and I could not ask for greater praise.

Regarding Ratched, terrazzo tile was used for the flooring of the solariums, real marble for inlaid linoleum for the lobby floor (inspired by the linoleum used in the location) and so forth. The tubs in the hydrotherapy room were made out of glazed ceramic tile, and the shower area from real glass block. And so on.

Among other design details, to give the long white hallway some texture, I used an art deco patterned Anaglypta on the walls. And, Ryan wanted the hospital rooms to look more like hotel rooms. This was actually accurate historically—research done for the series Feud had shown that hospital rooms for important guests in the 1940s and 1950s were often done up to resemble hotel rooms, complete with matching bedspreads and drapes. I swatched many vintage wallpapers for the rooms and Ryan liked them so much we decided to use a different wallpaper, fabric and color scheme in each room and give them individual names—“The Vine Room,” “The Lattice Room,” and so forth. More glamour!

At our first meeting, Ryan had also mentioned repurposing some areas that would have been found in a luxury hotel to fit the needs of the hospital. I suggested we transform a wine cellar into the jail area—and Robert found us a fantastic and under-used location with vaulted arches and original tile work that exactly fit this concept (with the addition of real jail bars!). I also designed the nurses’ break room using the concept of a hotel tearoom that had been transformed. Between research and my own memories of the tearoom at the department store where my grandmother worked, I came up with the frilly room where the peach is eaten!

The best compliment I have received on the show is when other designers and Art Directors ask me where we shot it—to make a stage set look that real,
by any means necessary (and possible!) is my ultimate goal as a designer. ADG