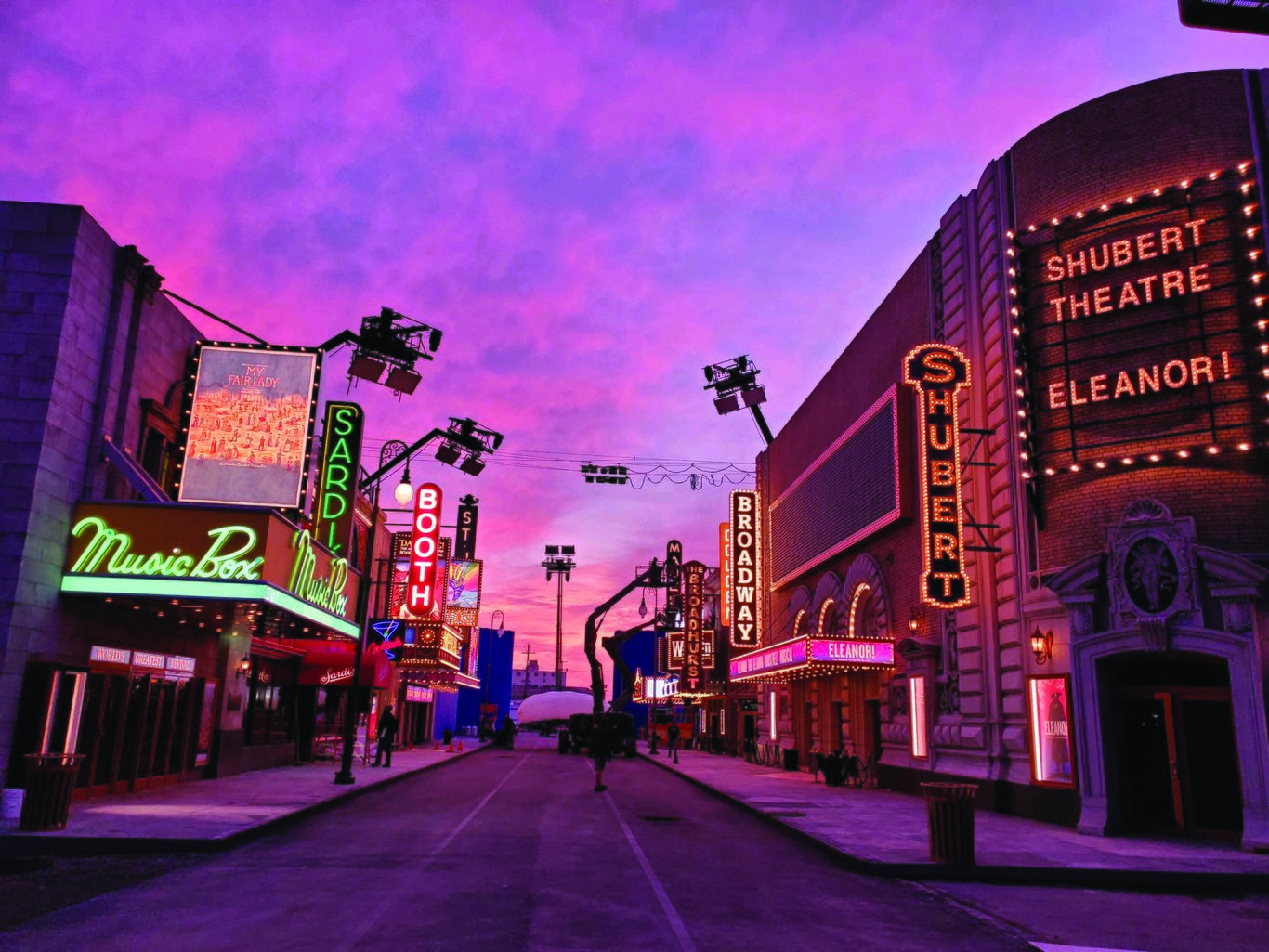 Perspective
Glitter and be Gay THE PROM 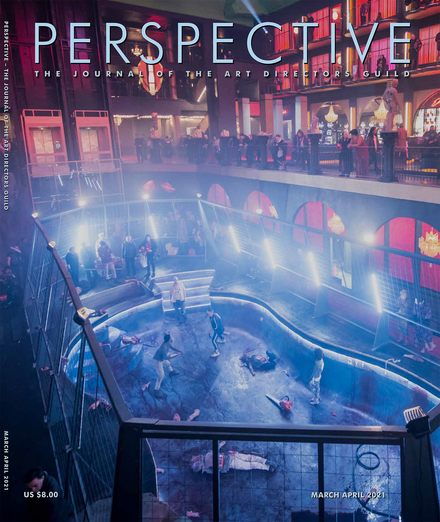 Above Image: 44TH STREET SET. THIS SET WAS BUILT IN AN EMPTY PARKING LOT IN DOWNTOWN LA NEAR THE FLOWER MARKET. PHOTO BY DAMON LIEBOWITZ.

“Let’s Talk Process” is Barry Glickman’s opening line in The Prom—a broadway musical turned 2020 Netflix movie. Basking in vanity on the opening night of Eleanor! The Musical (inside the musical), Barry, the one-time Drama Desk Award-winning performer, elaborates while dancing and singing:

Let’s talk process
When I’m in character, I go insane

I stagger, I stammer, I sob
I make the audiences feel my pain.

And if they don’t leave depressed

Then I’ve not done my job!

I would say the Art Department followed suit with the same approach when creating the scenery for the movie!

The excitement of any large project can be the jam band creation that is a collection of talents coming together to rely on each other. Well...come together to climb on top of each other in the rain to sort out information or send oneliners that, wait, “I didn’t get that, can you send it to me?” and debate budgets, push, prod, insist, inquire, demand, scream, laugh, panic, create and make something great together.

The project had five months of preproduction and sixty days of shooting, a fluid and evolving budget that sometimes included fringe, or strike, or equipment rental, or marquee lighting, or a shorter 44th Street, or a longer 44th Street or pull that set out altogether and budget the rest of the show without it and then try to save $50,000?

“What did it cost,” is a question often asked. Can we price that out in lost sleep and swear words?

The people. I know it sounds sentimental and super-musical-gay. But let’s face it. Strip away the glitter and glue sticks and the collective Art Department becomes a machine of people that stack what appears impossible on the backs of each other to make it possible.

The project like many others was at times a full-fledged pile on. And I know I’m risking my integrity by listing a small portion of the huge crew that thought, inspired, designed, hauled, lifted, hammered, plastered, stammered, painted, got rained on and jammed to get the street and other sets built in nine weeks. It’s worth it to thank them and call out those who connected on a daily basis to make the set possible.

The process for most sets began with mood boards. Production Designer Jamie Walker McCall curated her boards, pulling references from a wide range of resources, sometimes with the help of Art PA Emily Joe, to present to or leave with director Ryan Murphy. The favorites were marked with Post-its and gave her launching points she needed to design. From those mood board selects, ideas turned into renderings and ground plans. The mood boards, printed on 32”x40” foam core, were useful tools on scouts, meetings and were often sought after. Sometimes additional copies were left to be on location when sets were being loaded in. Gene the set decorator would affectionately hoard them.

Ryan Garton’s favorite set design was the 3D model he made for 44th Street. He developed the SketchUp model with many iterations and was often quoted, “it was roughed together, don’t treat it as gospel!” It was gospel and was used an uncountable number of times and we were grateful for the tool. This model was created in tandem with plan views and elevations developed by Sally Thornton and Cheyenne Bell for the facades and Emma Sparer for Sardi’s. They worked from street views, research, including historical illustrations and a lot of interpretative zhuzhing. When in doubt, more light bulbs.

Early stages of the development of 44th Street included an alley and theaters that were to be added by visual effects. The Prom on Broadway originally played at the Longacre Theatre and boy did theater critics love to point that out on social media. “It was snubbed!”—due to budget reasons!

Jamie had the idea to design a retro vibe marquee inspired by Meryl Streep’s character Dee Dee Allen’s fantastical (non-LED) vision of Broadway. Beyond just names in lights, it’s also the nostalgia perpetuated by other musicals like 42nd Street, the title credits for All That Jazz and the finale of the movie Chicago. The Eleanor! marquee would capture that flavor and was to be framed in the Sardi’s second-floor windows, featured during the reprises of “Changing Lives” when the singers discuss going to Indiana to change the life of a young lesbian named Emma.

This became the fulcrum of the Sardi’s/Shubert set relationship. From this, development for the exterior street and Sardi’s stage set could be flushed out. Height, width, stage use, sightlines and how the exterior street set would marry to the interior Paramount set would all be dependant on this sign’s placement.

This is when Jamie’s skill and background in graphic arts really shined/gittered. I cannot think of a greater tribute to the love of graphics than her design talent driving the show to feature a visual statement in this way. She understands the power of an iconic impact and the compliment is evident. Not only did it create a icon for the set but a theme that would infuse itself into the branding for the movie (including the credits).

The marquee was made of retro rock-and-roll equipment called Jarags. It’s notable that the production had been advised that these units were temperamental, had been phased out and we should consider building our own sign. That proved to be too cost-prohibitive considering the timeline. Yes, LED was considered, but Jamie really wanted the authentic look. So the Jarag units were pulled out of Canadian storage, one hundred forty units shipped, workshopped, rigged together, all thirty-five hundred bulbs (+600 for the frame) augmented by Damon and his team. It was controlled by Scott Barnes on a Hog 4 lighting console by High End Systems. This sign was used on the exterior set, disassembled and then reassembled at Paramount Stage 15 for the interior of Sardi’s, and visually danced both times. It is now rentable at Heaven or Vegas!

There were an additional eight thousand light bulbs and five thousand feet of LitGear Cinema Hybrid LED used on the additional signs and marques through the street.

Knowing that one wall of Sardi’s was featuring windows and the marquee allowed the rest of the set could take shape, including spinning booth banquettes. Development of what was happening at Paramount Stage (15) with Sarah Delucchi and the stage build team was symbiotic to that of the exterior downtown set. Any downtown challenge (glass size and sign placement to name a few) became Paramount stage challenges as well.
It is a test of skill, logistics and patience on all departments. We knew the patience paid off when watching the film. Sets were used the way Jamie had designed them to be. Ryan Murphy and the choreography team used all of the sets to their capacity. A few songs were trimmed down for the film, but during filming what was given was used. Director of photography Matthew Libatique aided in that as well. Up, down, behind and around, he

photographed the set from every angle. He brought the layer of rock-and-roll lighting to the film, washing many sets in colors of The Prom logo: pink, blue, teal and purple. Blasting the colors through the windows of Grandma Bea’s house despite having a backing out the windows gave the show the magic realism that musicals go to when reality is too blasé.

There could be an entire chapter written on the graphics for The Prom, but I think notable is the work that Dianne put into the floor of the interior Shubert. Inspired loosely by the Shubert lobby in NYC, Dianne vamped wonderfully and created an oceanic motiff that was printed on matte vinyl non-adhesive after being workshopped with Tom and Carol, applied to a skim-coated plywood, pieced together and waxed to sing all its own.

A final note worth mentioning—It won’t be the only time a project needs the help from a monster truck vendor. Monster X Tour was incredible and a special shout out to their ring leader Woody. There was a bit more to the monster truck rally scene which was cut out (we missed Nicole Kidman in a rainbow showgirl headdress!). A movie with a gay theme and monster truck rally is a notable collaboration not just because working with monster trucks is awesome, but because it was one of the only monster truck vendors who would work with the project given the content. In a world constantly discussing equality in entertainment, here was a way to bridge the gap. Yet there were monster truck companies who potentially thought the content of the movie—a teenage girl falling in love with another girl—too risky for their client base. So, I applaud Monster X Tour for taking that “risk” and allowing equality across entertainment.

It was moments like the monster truck collaboration and comments on the YouTube trailer—many from young adults discussing their own coming-out stories—that provided a window into the real heart of the work a movie can do. Afterall, the story of The Prom—a young girl who is denied going to prom with her girlfriend—is a true story that played out in Mississippi in 2010. It shows that what can glitter and be gay still has some grime and prejudice to expose. ADG